My name is Dylan Taylor, human incarnation of the burning dumpster gif, and this is my life.

I always wanted to be an X-Man. Except people and me never got along, and apparently you need social skills to run a successful team. Cue Emma Hall’s party. One hot make out session with the host herself, and I can talk to objects like my pillow (who’s far too invested in my love life) and my baseball bat (who was a pacifist before I got hold of him). Now there’s a whole group of us with strange abilities, including super hot ice queen Dani Kim who doesn’t approve of how reckless I can be. The bigger problem is a mysterious mutant causing unnatural disasters, and we’re the ones who have to stop him. Except trying to make a difference makes things blow up in my face and the team’s on the verge of falling apart. Can I bring them back together in time to stop the villain from taking revenge? Have I mentioned I’m not a people person? Magneto help us.

This book is "what if a teenage X-Men fan plus a random group of her classmates actually got superpowers", with all the delight and awkwardness that this description implies. The MC is nervous, not good at the whole "friend" thing and really believes that she's responsible to DO something with her newfound powers. The overall effect is earnest and extremely relatable if you've ever been really into some THING that just became weirdly relevant after years of obsession, or if you've ever dreamed about all your random knowledge being useful as more than a curiosity.

I like how the powers kind of fit their personalities while still not being anything I could predict. It feels like the kind of sideways logic that's emblematic of a superhero origin story without being overdone or trite. It grapples with moral grey areas in a way that's generally fun to read while being appropriately grim when necessary. The characters make a pretty great ensemble, and I like how they work to make their strange powers be effective when at first glance they don't seem very useful (neither singly nor together).

The only thing I didn't like was that the characters in general and the MC in particular had a tendency to use the kind of (usually self-effacing) ableist language that's so ubiquitous that most of us don't realize it's ableist until someone points it out (lame, dumb, etc.). It's a minor quibble in an otherwise fantastic book since the language isn't directed at anyone in an actively ableist way, but it was so frequent that it was distracting for me. I hope the characters learn better soon, but it was frustrating to read something full of ableist language when it could have used other words to convey the MC's low self-esteem. 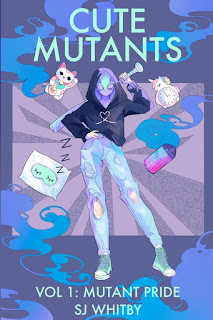