The First Fifteen Lives of Harry August by Claire North

The First Fifteen Lives of Harry August posits a strange version of mingled mortality and immortality, possibly repetitive, but capable of ending without warning or recourse.

I like the way the MC changes throughout the narrative. He's in very different mental states at different points in time, and the text does just enough to convey that without having the narrative voice shift in potentially jarring ways. Because it's told from one very specific point in his timeline, it grants a clarity of hindsight to experiences which range from euphoric to literally torturous. It also means that there's a bluntness to his descriptions, as the MC is remembering terror or joy, sometimes with little transition between the two. Chapters which are right next to each other may have very different moods in their detail, but his mood mostly changes between reflective and purposeful. The MC doesn't shy away from bloody descriptions, but he speaks about terror and torture without asking the reader to experience it with him.

One thing I think it gets right is that different kalachakra (a word which feels uncomfortable and stinks of cultural appropriation, though I hope I’m wrong) or ouroborans have very different reactions to their status. Some want to explore the world, some embrace how full of war the 20th century is and get as much of it as they can, some stay home and keep things going for the future ouroborans to have a better start. It also embraces the idea that the MC, living so many lives in an era when travel is suddenly easier than in prior centuries, would do a great deal of travel across his lives. The story stays pretty focused in Europe, Russia, and the USA, but has snippets of time spent other regions of the world in a way that attempts to demonstrate the breadth of his travel without making the main story drag. It's also repeatedly concerned with ableism and how the mentally ill are treated. Since the MC and his friends have a perspective which is frequently mistaken for mental illness, I'm glad it doesn't shy away from the potential impact of that.

The narrative has a nice balance between mostly linear bits of narrative and digressions to other points in his personal history, it was engaging to read and I love the way it kept from giving away the ending (and the specific context of it) despite the whole thing being told in media res. The discussions of what one in this position of intertwined mortality and limited contextual immortality would do with oneself, and I come away from it feeling as though I've absorbed both a very good story and the summaries of several philosophical papers; mentally stretched in a good way. It's concerned with what the ouroborans actually do as much as it is with what they think about it, so the philosophical digressions are complete enough to be interesting to anyone who cares, but are usually placed so that they further the story and are shortly backed up by action.

I like this book, but I have a few reservations about recommending it. Spoilers are somewhat unavoidable in this discussion, but it concerns the handling of queerness in the story. I think it would have done better to either avoid queerness altogether, or to actually address the reality of the AIDS crisis with more than a passing mention via killing off a character with it. It irks me even more because that character is possibly queer, and I say possibly since she is implied to have AIDS because of drug use in this life, but in a previous one she didn't sleep with the MC because she was "giving homosexuality a go". The narrative treats it as noteworthy only as one of two reasons she didn't have a relationship with him in one life, the other was a life in which she was married. The other time queerness is explicitly discussed within the text is when the (male) MC is considering whether he should allow himself to be seduced by the (male) villain. No seduction is attempted, and thus it remains a thought exercise of hypothetical homosexuality, mostly notable for the MC's musings that he must be feign being appalled by any such attempt because of the era in which he was born. 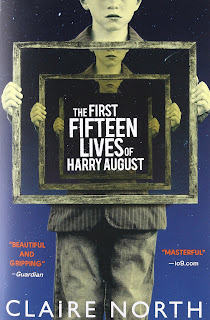