The Mistletoe Connection by Chelsea Pennington

The Mistletoe Connection is about connection and relationships while snowed in with strangers who are all doing their best on Christmas Eve at an airport.

I had a great time reading this, even the few characters I didn't like as people were perfectly suited to the story and it felt like they all had space to grow. The tension was in how they'd use this opportunity to be stuck with each other, whether they were strangers, old friends, family, or co-workers.

There were a lot of narrators but it was actually pretty easy to keep track of who was who, people were introduced gradually, with the early POV characters showing up the most, then other secondary characters getting a section or two from their POV later on once their place in the larger narrative was better established. The awkwardness in some of the couples was extremely relatable. I wasn't ever worried that something was going to turn out badly, but I didn't know what each couple's version of "okay" was going to be so there was a nice level of tension without it getting too stressful. Each of the pairs had very different dynamics without it feeling too much like a coincidentally different ensemble. Part of that is because they're at different points in life and thus have different kinds of relationships, so even pairings which could have felt similar due to some shared characteristic were instead pretty distinct. There were secondary characters who weren't in any of the couples which helped it feel like a real group of people at an airport and not the Coincidence Relationship Gauntlet. I especially loved the little girl who kept talking to people, every time she showed up it was wonderful and she reminded me of some little kids I've known.

I like how the characters’ peripheral awareness of each other helps build a sense of space within the mostly closed setting. They’ll notice strangers near them or in passing and then the reader can realize it’s one of the POV characters. The web of relationships between the people in the snowed-in airport feel natural and become gradually more complex as the evening wears on. It felt like what would really happen if they were stuck together but weren't really forced to interact. The way that all the characters worked through something and got to a better place felt good. The endings felt appropriate for each character, as everyone ended up with a resolution appropriate to the amount of revelation possible in a single night, and most of the endings are happy, or at least more positive than their beginning. 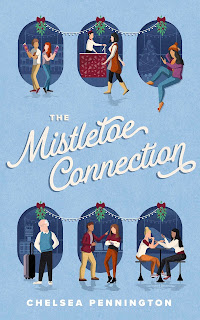