A famously disappointing minor royal and the Emperor's least favorite grandchild, Prince Kiem is summoned before the Emperor and commanded to renew the empire's bonds with its newest vassal planet. The prince must marry Count Jainan, the recent widower of another royal prince of the empire.

But Jainan suspects his late husband's death was no accident. And Prince Kiem discovers Jainan is a suspect himself. But broken bonds between the Empire and its vassal planets leaves the entire empire vulnerable, so together they must prove that their union is strong while uncovering a possible conspiracy.

Their failure will be the end of the empire.

Queer Rep Summary: Gay/Achillean Main Character(s), Bi/Pan Main Character(s)*, Genderqueer/Nonbinary Secondary Character(s).
*Early on one of the MC's describes himself as not being gender-exclusive which I'm interpreting as bi/pan, but the actual romance in the book is completely Achillean.

This features someone in a new relationship after suddenly losing their partner, paired with someone who's never been married before, with the fate of the empire depending on their success. Both pairings were political, and the new partner has a passing familiarly with the former one, enough to know who they were but not how they were. Part of why I love this book so much is for the way it portrays someone in a relationship after an abusive (or at least controlling) one, after being gaslit and diminished, discounted until he couldn’t trust his own thoughts and barely dared to have opinions but wouldn’t dream of voicing any. Watching him come alive and grow throughout the book was wonderful, and the way his new partner tries to get to know him and figure out what he needs was really sweet. The dynamic between the two MC’s helps further the political and mystery bits of the plot while never losing focus on their relationship as the heart of the story. It’s powerful, cathartic, and very moving.

The two MC's have very distinct voices and it was wonderful to feel them slowly falling in love with each other, to get descriptions through the other one's eyes. I especially love the parts when the POV character just switched and the new POV character is thinking about the other one as their turn to narrate begins. Going from being immersed in someone's thoughts to watching them through the eyes of someone who cares about them was really sweet.

My thoughts are a bit complicated about the gender coding in this book. I have a lot of respect for a story which explicitly includes nonbinary people in the list of genders, but also has multiple culturally-specific systems for gender coding and some comments about how the systems aren't actually as clear and useful as the people using them seem to think they are. It's a nice blend of inclusion and irreverence, and while (being agender) I would personally find a three-gender system as stifling as a two-gender one, I did appreciate it as world-building. It's also means there are several nonbinary secondary characters and at least one of them is recurring and plot-important, so that was very nice.

Speaking of world-building, I think my favorite random detail was the way animals are named in this world, it leads to a kind of an uncanny-valley feeling, where I don't always know what the creatures mentioned look like, but I know they're definitely not what my normal mental image would be.

I love the diplomatic stuff and the mystery-solving bits, the two MC's focused on different parts of it because they're very different people and were in positions to figure out different bits of what was going on. It's tense in great ways, and the rather dramatic climax of the story is really great. Some parts of the world-building are very specific and laid out because a lot of it's complicated, especially what's needed to understand the political part of the plot. One thing that kept this from overwhelming the narrative (aside from how much I love interpersonal politics and highly specific diplomatic things) was that the two MC's think about the events in different ways and understand completely different bits of what was going on, which naturally let there be space to explain important things again in new ways without it feeling redundant. It's also a long enough book that if someone were to read this over a longer period of time than I did (I read it in a day) the bit of repetition that is there is spaced out enough to feel more like reminders of small but important details rather than rehashing the story.

End of year-a-thon: Star on cover 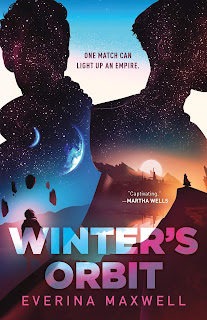