Derek is LitenVärld's most loyal employee. He lives and breathes the job, from the moment he wakes up in a converted shipping container at the edge of the parking lot to the second he clocks out of work 18 hours later. But after taking his first ever sick day, his manager calls that loyalty into question. An excellent employee like Derek, an employee made to work at LitenVärld, shouldn't need time off.

To test his commitment to the job, Derek is assigned to a special inventory shift, hunting through the store to find defective products. Toy chests with pincers and eye stalks, ambulatory sleeper sofas, killer mutant toilets, that kind of thing. Helping him is the inventory team — four strangers who look and sound almost exactly like him. Are five Dereks better than one?

Defekt follows an employee trying to keep doing his best as his world cracks and gets stranger despite his efforts to fit in and follow the manual. I love the chapter openers from the employee manual. The overly cheery corporate-speak helps to establish the tone of the book, especially when the MC is very familiar with this document (or with others like it). It’s informing the world and the characters’ inner lives at the same time, and it’s very funny on top of all that. The MC is in the perfect middle zone between technically being an unreliable narrator and also never actually lying to the reader (and not trying to either). The book is so observant and the MC is so clueless, and it was so wonderful to view this strange hyper-corporate world through the eyes of someone who loves it because it's the only thing they know. The secondary characters were great counterpoints to the MC's perspective while also feeling like full people separate from his conception of them, it's great world-building (especially for such a short story).

This is a sequel to FINNA (and contains a minor spoiler for it), but DEFEKT can completely stand alone. I'll do my normal sequel check but some of the answers might feel wonky because the author has said FINNA was intended to be stand-alone (and therefore wasn't trying to leave hanging threads for a sequel to grab on to). This doesn't wrap up anything left hanging from the previous book, but it does temporally situate the books in relation to each other very succinctly and I appreciated that touch. The whole story starts in this book and wasn't present in the first one, and it is its own story in a connected universe. I don't think it left anything in particular for additional sequels to pick up, but I would be very interested in more stories based in this location, especially given how DEFEKT ends. While I don't think anything was left open on purpose, the world is open enough to give room for more stories told here while being specific enough to be interesting. The MC is different from the first book and his voice feels distinct from the previous book's MC. Finally, this would absolutely make sense if you hadn't read the first one, but, again, it does open with a minor spoiler from FINNA so I do recommend reading FINNA first if you're planning on eventually having read both books. 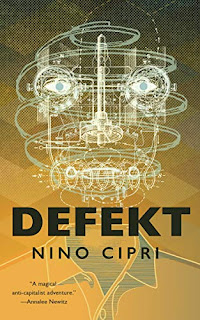