This gorgeously imagined YA debut blends shades of Neil Gaiman's Stardust and a breathtaking landscape of Hindu mythology into a radiant contemporary fantasy.

The daughter of a star and a mortal, Sheetal is used to keeping secrets. Pretending to be "normal." But when an accidental flare of her starfire puts her human father in the hospital, Sheetal needs a full star's help to heal him. A star like her mother, who returned to the sky long ago.

Sheetal's quest to save her father will take her to a celestial court of shining wonders and dark shadows, where she must take the stage as her family's champion in a competition to decide the next ruling house of the heavens--and win, or risk never returning to Earth at all.

Brimming with celestial intrigue, this sparkling YA debut is perfect for fans of Roshani Chokshi and Laini Taylor.

Queer rep summary: Implied Lesbian/Sapphic Secondary Character(s) but I didn't finish the book so I don't know if it's confirmed.

This is my second attempt at reading Star Daughter and it just doesn’t click with me. I think the thing that’s irking me is that it’s full of pining for the status quo to be different but we don’t actually spend any time in the status quo she’s objecting to. So changes don’t feel important, it just feels like I’m getting jerked around. Almost as soon as we meet her kind-of-boyfriend we find out he knows her secret so it doesn’t feel like a betrayal to me as a reader because I don’t have the emotional weight of liking him first... I struggled so much with this book. The MC will say what she thought her state of mind was going to be and then tells us what it actually is... but when the first time we find out what she thought it would be is when it's something different it just feels confused. A minor example that shows this issue without really being a spoiler: the first time we ever hear about Little India in/near her neighborhood is when she finds out it has a magical night market. Cool, yay? But since we didn’t visit it at all or have the mundane side of it discussed previously my reaction isn’t “wow Little India has a magical night market!”, it’s more like, “oh sure, this new story location (Little India) has a particular feature (a magical night market). I’m not excited because I had zero expectations as to the existence or non-existence of this place. This really is a minor example, but it comes on the heels of several like it that are definitely spoilers.

I didn't get as far as the actual competition part of the narrative, so I can't vouch for how any of that plays out. If you want a story that spends at least the first half feeling like the aftermath for something you didn't get to see, you might like this. I like the MC's best friend, she feels so much more vibrant than the MC, so much so that I wouldn't be surprised to learn that in the second half the book reveals the MC's emotions were dampened by being on Earth or something, that's really the only thing I can think of that would make the flat characterization and lack of tension around the MC's narration feel purposeful. But, for me, I spent almost half the book waiting to care about the story and that just never happened, so I'm calling it quits. 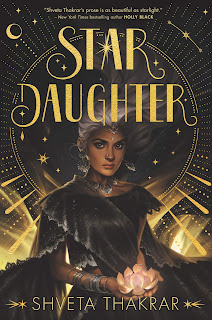