The year is 1926, and Shanghai hums to the tune of debauchery.

A blood feud between two gangs runs the streets red, leaving the city helpless in the grip of chaos. At the heart of it all is eighteen-year-old Juliette Cai, a former flapper who has returned to assume her role as the proud heir of the Scarlet Gang--a network of criminals far above the law. Their only rivals in power are the White Flowers, who have fought the Scarlets for generations. And behind every move is their heir, Roma Montagov, Juliette's first love...and first betrayal.

But when gangsters on both sides show signs of instability culminating in clawing their own throats out, the people start to whisper. Of a contagion, a madness. Of a monster in the shadows. As the deaths stack up, Juliette and Roma must set their guns--and grudges--aside and work together, for if they can't stop this mayhem, then there will be no city left for either to rule.

So I knew this was a retelling. I knew it was a Romeo and Juliet retelling set in 1920's Shanghai. This absolutely blew me away beyond anything I could have expected based on that description. I caught a few allusions and recognized enough characters from the original to feel that this is unquestionably a retelling. But, instead of feeling like the old play in a new skin this feels like it shattered the old version and built something wholly different from the pieces, reforming and rearranging them so that you recognize bits of familiar features in surprising places but could have never predicted what the whole would look like when you step back and take it all in. It's everything I could have wanted in a retelling with this premise and even more than I dared expect. The choices in which originally minor characters to elevate to major character status feel perfect. The fantasy twist gives a plot reason beyond sudden love for the MC's to actually have to work together, while still keeping elements of that young love and naïve passion in their history bleeding into the present. It's enemies-to-lovers without losing the reasons that they were and are enemies, making explicit all the reasons their mutual efforts are a terrible idea and a necessary thing.

I love the worldbuilding and characterization, especially the way which languages are spoken and when is used to flesh out the characters and give little hints as to their state of mind in any one moment. The MC's all have very different voices, making it pretty easy to keep track of who's narrating at any one time. The ending is great, except for the bit where the sequel isn't available yet, but time will remedy that. I love it but it hurts, which is definitely a theme in the book so it feels appropriate for that to be how I feel about the end. Juliette is loveably stabby, her rapport with Roma feels anguished, heartfelt, and very believable. 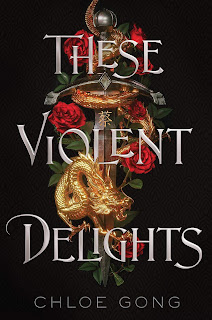