In Jade War, the sequel to the World Fantasy Award-winning novel Jade City, the Kaul siblings battle rival clans for honor and control over an Asia-inspired fantasy metropolis.

On the island of Kekon, the Kaul family is locked in a violent feud for control of the capital city and the supply of magical jade that endows trained Green Bone warriors with supernatural powers they alone have possessed for hundreds of years.

Beyond Kekon's borders, war is brewing. Powerful foreign governments and mercenary criminal kingpins alike turn their eyes on the island nation. Jade, Kekon's most prized resource, could make them rich - or give them the edge they'd need to topple their rivals.

Faced with threats on all sides, the Kaul family is forced to form new and dangerous alliances, confront enemies in the darkest streets and the tallest office towers, and put honor aside in order to do whatever it takes to ensure their own survival - and that of all the Green Bones of Kekon.

Jade War is the second book of the Green Bone Saga, an epic trilogy about family, honor, and those who live and die by the ancient laws of blood and jade.

There was so much death in Jade City that I came into Jade War assuming this book would be a river of blood, but I was wrong in the best way. This is an excellent and moderately bloody sequel filled with the political and inter-personal fallout from Jade City (plus a lot of its own thing which sometimes does actually involve a lot of blood). Many of the moves made here are positioning and jockeying for the final stages of this conflict which I expect will happen in the conclusion to the trilogy, Jade Legacy. There are moments of (sometimes very intense) violence and a conclusion which had me on the edge of my seat; the tension and quiet between are managed really well across the nearly 600-page book. Jade City set me up to expect that anyone could die and that a lot of people would. This is the calm before the oncoming storm of violence and blood, featuring some damage, and a little death, but not nearly as much as Jade City. That also meant that I had time to really get to know and worry about all the characters, since if it had been a 600-page bloodbath I would have been numb to it halfway in. No, it's not like that; there's time to care, to rest, to mourn, to pick up the pieces and carry on before something goes horribly wrong all over again.

This is book two of a trilogy, so it's time for my normal book two check. This wraps up several things which were left hanging from the first book; The storylines are complicated enough that I expect the repercussions of how many things were wrapped up will have echoes in the third book, but many things feel either resolved or escalated to a more serious level where we have something legitimately bigger things to worry about and the small stuff is closed. There's a pretty major storyline which is introduced and resolved within this book. I'm thinking of a particular one, but there are several contenders depending on how narrowly you define "introduced and resolved" in this volume. There are, heh, so many things for the sequel to pick up. This is the saga of a family and a nation, every book spans years, and I'm very excited to find out what happens to them after this portion of the story. There's also some pretty major things that come to a head at the end of this book and I need to know the aftereffects. There are several returning POV characters from the Jade City, plus a few minor ones, and their narrative voices feel pretty distinct even though we don't get much time with the minor characters narrating. Sometimes those differences are accomplished through conveying their assumptions about what's going on, as different people have different levels of information, but the rotating cast of main point-of-view characters definitely have distinct voices from each other. And, finally, answering whether someone could start with this book and have things still make sense... I think so. Because the book has so many story threads and characters it's actually pretty good about grounding you in the importance and history of a character either the first time they show up in this book, or pretty soon after. It never felt like infodumping to me, but there were little descriptions or things the characters were mulling over which could either make someone remember their importance from the first book, or serve to establish them to someone who hadn't read Jade City but decided to read Jade War. I read Jade City a few months before reading this and the reminders were welcome without ever being annoying. Enough time is passing for the characters that those refrains are important even if you remember everything because it lets you know what the characters are still worrying about one, two, or even five years after it happened. That being said... don't read this by itself. Yeah, it'll probably make sense, but the resolutions that do happen here will be so much more meaningful and emotionally impactful if you've already spent a whole book getting to know the characters and the world first.

I appreciate the way that this series so far is really engaging with the way that this kind of bloody decade-long conflict would leave a lot of people with disabilities, both visible and invisible. There's a character who became disabled in Jade City who reappears in Jade War in a minor but important role, as well as discussions of how various characters are either ignoring or dealing with the emotional impact of all this stress. There's also a character whose entire arc in this book is built around how he recovers (or doesn't) from some pretty brutal trauma in the first book. I can't vouch for the realism of each individual depiction of disability, but as a whole it creates a feeling that author took the time to try and get it right on a variety of facets. It's good worldbuilding, great storytelling, and makes me feel cared for as a reader even as I worry which of my favorite characters will die next.

Clear Your Shit Readathon 2020 prompt: Book with a map 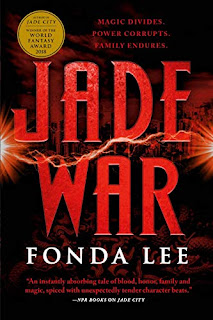