This is the story of an apparently young, amnesiac girl whose alarmingly unhuman needs and abilities lead her to a startling conclusion: She is in fact a genetically modified, 53-year-old vampire. Forced to discover what she can about her stolen former life, she must at the same time learn who wanted-and still wants-to destroy her and those she cares for and how she can save herself.

Fledgling is a vampire story about racism and ableism in a community which thought they were immune to such concerns. A persistent search for justice in a supernatural community.

This is a book built of quiet moments and aftercare, processing trauma and building a new life from the ashes of the old. It’s also a damn good vampire story, with a rich mythology and a kind of vampirism built on community and family history, rather than the usual legacy of sires and victims. I love this book, it's a quieter read than most of the other vampire books I like (normally I lean into urban fantasy), but the way it pays attention to people is subtly powerful.

This book has a version of polyamory which was intriguing. The presence of vampires mingled with humans and the way that complicates questions of consent is explored really well. The MC is not a child in human years but has the appearance of a child, this might make some readers uncomfortable when she engages in adult behaviors (like sex), so please take care of your boundaries when reading.

Because the MC has memory loss and does not remember any of her personal history from before the book opens, there are a lot of explanations which can feel repetitive. She's quick to pick up on things, but has to justify herself and her current state of existence over and over. Sometimes this is because of ableist reactions from people around her, assuming that because she has lost one thing (memory) she therefore is unable to do other things (like reason soundly with the information she does have). Her fresh perspective makes this into a story I would recommend for people who are new to vampire stories and people who are very familiar with them because it's a version of the mythos which is new enough to be interesting for those who already  like vampire stories, but it also explains enough to keep newer readers from being lost. While some of the repetition can be irritating, that's obviously on purpose because of the effect it has on the MC and the way different secondary characters ask similar questions. The way this book handles questions of racism in a people who (until now) thought they were categorically immune from it begins subtly and then grows more and more overt as it becomes clear what's happening and how they're wrong about being unable to be racist. The way the MCs age, skin color, lineage, and recent disability are used by some characters to discount her and invalidate her personhood is made explicit in the book without losing the story at all. That's because dealing with the aftereffects of the events right before the book started is the story, it's not some side plot or distraction. It's important and central to the story, and the role which racism plays is crucial to the book. 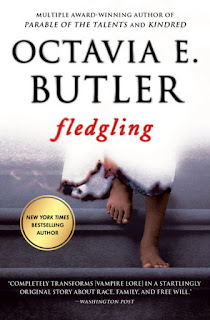