Can't Take That Away by Steven Salvatore

Carey Parker dreams of being a diva, and bringing the house down with song. They can hit every note of all the top pop and Broadway hits. But despite their talent, emotional scars from an incident with a homophobic classmate and their grandmother's spiraling dementia make it harder and harder for Carey to find their voice.

Then Carey meets Cris, a singer/guitarist who makes Carey feel seen for the first time in their life. With the rush of a promising new romantic relationship, Carey finds the confidence to audition for the role of Elphaba, the Wicked Witch of the West, in the school musical, setting off a chain reaction of prejudice by Carey's tormentor and others in the school. It's up to Carey, Cris, and their friends to defend their rights--and they refuse to be silenced.

Told in alternating chapters with identifying pronouns, debut author Steven Salvatore's Can't Take That Away conducts a powerful, uplifting anthem, a swoony romance, and an affirmation of self-identity that will ignite the activist in all of us.

CAN'T TAKE THAT AWAY Is about being true to yourself, following your dreams, and making your small slice of the world a little safer for the ones who come after.

The plot rotates between focusing on the MC's inner struggles and musical aspirations, the queerphobic treatment they encounter at school, and their relationships (both platonic and romantic). Early on these sections felt a little more divided, but as the book continues these facets of the MC's life bleed into each other as the MC figures out how they're actually interrelated and how solutions in one arena can lift up every other part of their life.

This is a book I wish I'd had as a teen, it's got a good balance between explaining the MC's queerness and just showing them living it. Part of that experience is dealing with homophobia, queerphobia, and transphobia as a genderqueer high schooler, and part of it is a sweet but tumultuous romance as the MC keeps getting in their own way. The friendships (and friend list) change and grow throughout the story in a way feels appropriate without being rushed, and I had time to really get to know their friends and how they are around each other. The chapter headings keep the reader up to speed on their oscillating pronouns, coupled with a simple and effective method for the characters in the book to keep track too (color coded bracelets). I really appreciated this because it meant I could relax and not constantly be bracing for them to be misgendered. This book also made me wish I knew more about Mariah Carey; the MC's passion for her music and their enthusiastic knowledge about her life was woven throughout the book in a blend of allegory and coping mechanisms which are foundation to the story. As someone who doesn't know much about Mariah, I was grateful that references to her were given enough context to make the parallels and inspiration clear without distracting from the story. I learned more about her via the MC, which in turn connected me even more to the MC as they processed their experiences and emotions via their passion for the singer, rather than being emotionally isolated from the MC due to my minimal knowledge of Mariah. 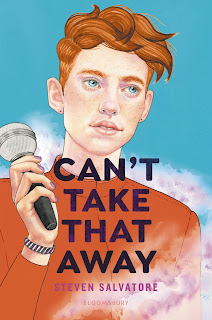