In 2017 Sarah Gailey made their debut with River of Teeth and Taste of Marrow, two action-packed novellas that introduced readers to an alternate America in which hippos rule the colossal swamp that was once the Mississippi River. Now readers have the chance to own both novellas in American Hippo, a single, beautiful volume.

Years ago, in an America that never was, the United States government introduced herds of hippos to the marshlands of Louisiana to be bred and slaughtered as an alternative meat source. This plan failed to take into account some key facts about hippos: they are savage, they are fast, and their jaws can snap a man in two.

By the 1890s, the vast bayou that was once America's greatest waterway belongs to feral hippos, and Winslow Houndstooth has been contracted to take it back. To do so, he will gather a crew of the damnedest cons, outlaws, and assassins to ever ride a hippo. American Hippo is the story of their fortunes, their failures, and his revenge.

Previously I read River of Teeth by itself, this book includes River of Teeth, Taste of Marrow, and some new stories (Worth Her Weight in Gold, Nine and A Half). This review is for the entire volume of novellas and short stories.

American Hippo is a fun and bloody duology of heists and rescues while riding hippos in an alternate version of the 19th century USA. I love the full story as collected in this book. Anyone who has already read River of Teeth could read the short stories at any point since they’re prequels, but they would lack context without having read the first novella so they’re well-placed at the end of the book. The two novellas really are two halves of a whole and I’d recommend this to anyone interested in “what if the USA actually went through with that hippo-ranching plan but did it a few decades earlier” and who loves a deadly heist story.

River of Teeth is a heist steeped in danger and death. It’s a very fun story to read, but it establishes very early on that it’s set in a dangerous place and the characters are embarking on doing a dangerous thing (or several). It makes the stakes feel very real early on. I love the MCs, they don’t totally get along but they’re pulled together by money, grief, revenge, and other personal goals in the way that a great group heist thrives on. I like the ending but I’m glad there’s more with these characters because I want to read about them doing more things! I love Hero and Houndstooth, they’re well-developed as separate characters and their relationship feels so genuine and fun to read. The sparse descriptions keep it from slowing down the main plot while still establishing and reinforcing this budding romance in the middle of the heist/revenge plans. - CW for racism (minor), fatphobia, transphobia (minor), pregnancy, drug use (smoking), alcohol, fire/fire injury, blood (graphic), gore, violence (graphic), medical content, animal death, child death, murder, major character death, death (graphic). River of Teeth: Bookshop Affiliate Buy Link

Taste of Marrow gracefully handles the transformation of a betrayer from the first book into a protagonist in the second. The way Hero and Houndstooth’s relationship was handled in River of Teeth meant that the dynamic in ToM is completely believable despite their relatively brief acquaintance before this point. If RoT is characterized by grief and revenge, ToM adds sorrow and rage to the mix, as the heist which pulled them together is over and they’re dealing with the aftermath. While the characters are in suspense, I’m grateful that as a reader I wasn’t in the dark about whether or not certain characters were alive. That meant a lot of the suspense and anguish was over whether they’d find out the answers, and what they’d do about it, not what the answers were. Please don’t mistake this for a lack of tension or uncertainty, there’s plenty of that, with long stretches where I was on the edge of my seat, but there’s particular feeling of being lied to as a reader, and this story avoids that. The scenes between Hero and Adelia, especially when Hero finally talks about why they retired... goddamn I love that scene. This is a quieter story than the first one (at least until the finale), and as much as I loved the heists from before, I love the quiet moments between characters who might not like each other personally but are committed to being their own kind of decent. - CW for intrusive thoughts, pregnancy (backstory), grief, alcohol (graphic), illness,vomit, blood (graphic), violence (graphic), kidnapping, medical content, animal death (graphic), torture (graphic), death (graphic). Taste of Marrow: Bookshop Affiliate Buy Link

Worth Her Weight in Gold is a brief and fun bit of backstory for a detail anyone who’s read River of Teeth will already know about Ruby. - CW for animal death (minor), death (not depicted).

Nine and A Half is full of quips and brandished guns, recounting the nine times Archie has saved Houndstooth’s life while living through time number nine-and-a-half. - CW for guns. 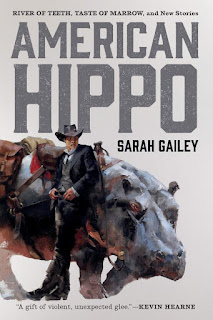