The Luminous Dead by Caitlin Starling

A thrilling, atmospheric debut with the intensive drive of The Martian and Gravity and the creeping dread of Annihilation, in which a caver on a foreign planet finds herself on a terrifying psychological and emotional journey for survival.

When Gyre Price lied her way into this expedition, she thought she’d be mapping mineral deposits, and that her biggest problems would be cave collapses and gear malfunctions. She also thought that the fat paycheck—enough to get her off-planet and on the trail of her mother—meant she’d get a skilled surface team, monitoring her suit and environment, keeping her safe. Keeping her sane.

Instead, she got Em.

Em sees nothing wrong with controlling Gyre’s body with drugs or withholding critical information to “ensure the smooth operation” of her expedition. Em knows all about Gyre’s falsified credentials, and has no qualms using them as a leash—and a lash. And Em has secrets, too . . .

As Gyre descends, little inconsistencies—missing supplies, unexpected changes in the route, and, worst of all, shifts in Em’s motivations—drive her out of her depths. Lost and disoriented, Gyre finds her sense of control giving way to paranoia and anger. On her own in this mysterious, deadly place, surrounded by darkness and the unknown, Gyre must overcome more than just the dangerous terrain and the Tunneler which calls underground its home if she wants to make it out alive—she must confront the ghosts in her own head.

But how come she can’t shake the feeling she’s being followed?

THE LUMINOUS DEAD is dense, claustrophobic, atmospheric horror, dripping with details. It builds a miasma of uncertainty by describing what the MC thinks happened then sometimes admitting that she was wrong, rarely revealing if her guide was mistaken too. The first half lingers on meticulous detail of the path through the caves, so that later we will know why a missing cache is worthy of terror, why the thought of pressing on towards one camp or returning to another elicits a silent scream. It tells in pieces a small and personal history of death underground, the dependence on the only voice around, helplessness when chance, mistrust, and technological failure cause breaches in connection.

I’m finding that I really like this kind of quiet horror. Books where most of the story is just explaining literally what’s happening, but the horror is in what should be happening but isn’t, shouldn’t be happening but is, and the precariousness of having to trust other people about one’s own body, in contexts where it is difficult to control whether or not boundaries will be respected. It understands that gaslighting is isolating and terrifying, and the terror is in being almost sure, wrong once, right once, and then never again being quite certain of what’s really happening. Hallucinogenic substances, involuntarily ingested, may be involved, in various times and manners. 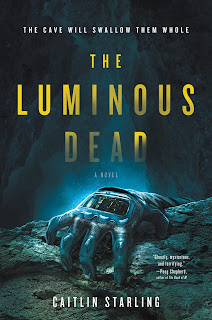