Sam leads a pretty normal life. He may not have the most exciting job in the world, but he's doing all right--until a fast food prank brings him to the attention of Douglas, a creepy guy with an intense violent streak.

Turns out Douglas is a necromancer who raises the dead for cash and sees potential in Sam. Then Sam discovers he's a necromancer too, but with strangely latent powers. And his worst nightmare wants to join forces . . . or else.

With only a week to figure things out, Sam needs all the help he can get. Luckily he lives in Seattle, which has nearly as many paranormal types as it does coffee places. But even with newfound friends, will Sam be able to save his skin?

Every once in a while I read a book just because of the title, this time that was a very good decision. HOLD ME CLOSER, NECROMANCER is about a young man who discovers very abruptly that he's actually a sorcerer and his mother never told him.  Suddenly dealing with just enough power to get him in trouble but not enough to get him out of it, he has caught the attention of a very powerful and territorial necromancer who is still making up their mind whether to use him or just get rid of him altogether. Thoroughly irreverent but able to buckle down when things get serious, this was a fun ride.

The whole book has a wry sense of humor: understanding how serious things are but joking about it anyway. It's a "laugh at the darkness in order to not weep" sort of feeling, and it completely fits the protagonist's personality. It builds the world and what we need to know of the magic in a kind of haphazard way, more about how the characters need and react to the information than trying to lay out the rules for the reader. I like the choice to have the villain be a point of view character, he seems almost cartoonishly evil when he’s around the main character because his goals are so antithetical to everyone else’s happiness that he could easily have felt overplayed or one-note in his dealings with Sam. Getting his perspective and goals in his own words didn’t make me like him any better as a person, but it made him a much fuller character and I think it worked well. 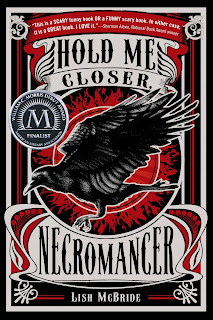 Labels: Recommended: Yes YA: Fantasy YA: Horror YA: Paranormal