Endangered, adjective: Threatened with extinction or immediate harm.
Australia, noun: A good place to become endangered.
Alexander Price has survived gorgons, basilisks, and his own family--no small feat, considering that his family includes two telepaths, a reanimated corpse, and a colony of talking, pantheistic mice.

Still, he's starting to feel like he's got the hang of things...at least until his girlfriend, Shelby Tanner, shows up, asking pointed questions about werewolves and the state of his passport. From there, it's just a hop, skip, and a jump to Australia, a continent filled with new challenges, new dangers, and yes, rival cryptozoologists who don't like their "visiting expert" very much.

Australia is a cryptozoologist's dream, filled with unique species and unique challenges. Unfortunately, it's also filled with Shelby's family, who aren't delighted by the length of her stay in America. And then there are the werewolves to consider: infected killing machines who would like nothing more than to claim the continent as their own. The continent which currently includes Alex.

Survival is hard enough when you're on familiar ground. Alex Price is very far from home, but there's one thing he knows for sure: he's not going down without a fight.

TITLE: Pocket Apocalypse
AUTHOR: Seanan McGuire
PUBLISHER: Daw Books
YEAR: 2015
LENGTH: 368 pages
AGE: Adult
GENRE: Fantasy, Urban Fantasy
RECOMMENDED: Highly
Queer Rep Summary: No canon queer rep.
POCKET APOCALYPSE takes transformational body horror to some strange and terrifying places when Alex and Shelby head to Australia to try and control an invasive werewolf outbreak.
Intellectually, I love this version of werewolves. They have an internal logic to their features which is a great blend of folklore and the science-adjacent flavor of this series. Emotionally, this was terrifying, I didn't anticipate that a creature-feature story was going to make me that afraid of a monster I already know and love so well.
The way Alex immediately draws parallels between his family and Shelby's and then has to swiftly discard them in order to get a handle on what's actually going on was really well handled. It plays into the book's themes of prejudice and intolerance in a way that makes in clear that Alex isn't infallible, just trained. As much as he's trying to get his unwilling hosts to budget a little he has a lot to learn too. Meeting this group who are differently secretive and twitchy than the Price/Healy family was an interesting and mostly good emotional rollercoaster. The characters are vibrant and instantly memorable, even (perhaps especially) the ones I disliked. I hated Shelby's dad so much. He's a fascinating character but someone I instantly detested as soon as he started in on Alex. His single-minded hatred of who Alex is and what he represents is great thematically for the book, but I still don't like him. One of the things I appreciate about this series is that the characters grow and change, even within a single volume. Not enough to be too much to follow, but a very reasonable amount for the kinds of realizations and epiphanies that their line of work primes them for, where "primes" is code for "repeatedly places in danger", and almost-but-not-actually-dying is great for generating epiphanies and reassessing one's priorities in life.
I was pleasantly surprised by how this wraps up something from the previous book, or at least moves it along in a meaningful way. Due to the episodic nature of this series I wasn't counting on that closure, but I like what happened. The main storyline starts here and wasn't present previously. There are several major things which are introduced and resolved here, and a pretty important thing left for some future sequel to address, whether or not that sequel is from Alex's perspective. The MC is the same as the last book and his narration is consistent. I think this would mostly make sense if someone came across it at random and didn't know about the series, but since this is the second book starring Alex it would be better to go back one for HALF-OFF RAGNAROK.
CW for sexism, misogyny, confinement, blood, gore, medical content, gun violence, violence, animal death, murder, major character death, death.
Bookshop Affiliate Buy Link
Add this on TheStoryGraph 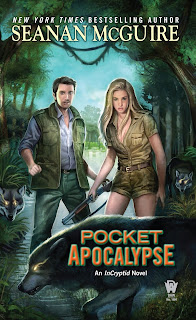