Cryptid, noun: Any creature whose existence has not yet been proven by science. See also monster.

Cryptozoologist, noun: Any person who thinks hunting for cryptids is a good idea. See also idiot.

What do gorgons, basilisks, and frogs with feathers all have in common? They're all considered mythological by modern science, and some people are working very hard to keep them that way.

Alexander Price is a member of a cryptozoological lineage that spans generations, and it's his job to act as a buffer between the human and cryptid worlds--not an easy task when you're dealing with women who has snakes in place of hair, little girls who may actually be cobras, and brilliant, beautiful Australian zookeepers. And then there's the matter of the murders...

Alex thought he was choosing the easier career when he decided to specialize in non-urban cryptids, leaving the cities to his little sister, Verity. He had no idea what he was letting himself in for. It's a family affair, and everyone--from his reanimated grandfather to his slightly broken telepathic cousin--is going to find themselves drawn in before things get any better.

HALF-OFF RAGNAROK properly introduces Alex Price in true Price/Healy fashion: with a bunch of winged frogs and a mysterious death to investigate. This keeps the fun tone established earlier in this death-stalked series, but filtered through a different narrator than before. Alex is a little calmer than Verity (or at least less inclined to jump off of rooftops), and switching to follow him gives the series an opportunity to show someone maintaining a deeper cover. I liked getting to meet Alex properly, as well as spending time with some of the other members of the family. The mystery was engaging, I ended up guessing who but the “why” surprised me and fit the story really well. It was twisty enough to be very interesting and handled in a way where the eventual solution had that really good mix of feeling a little bit inevitable but still innovative. I love the sheer number of reptilian and reptile-adjacent Cryptids which filled this book, those were an exciting treat.

On to the sequel check! I don’t think this really wraps up anything from the previous book. It does give a kind of status update to several things from the last one, but there was a rather dramatic event in the previous book that is too big to be concluded in a single volume. Almost all of the main story line starts in this book and was not present in the last one, except for that aforementioned follow-up, and features several things which are introduced and resolved here. It does leave a very major thing to be resolved later because the major development it inherited is not done yet. This is the first main character change in the series, and the voice is very distinct from the previous narrator. Most of the similarities they have are explained by being siblings, but they have entirely different ways of using all of that very deadly family knowledge, and that lets their individual personalities shine in their respective narrative styles. This story would definitely make sense if someone started here and didn’t already know about the series. I suspect that that will be true every time the narrator changes, as I understand that is a staple of the series. Either way it’s definitely true for this book that it would still make sense if read first.

This was a lot of fun and I'm excited for the next one. I like the change in narrators, it lets different parts of the cryptid and cryptid-adjacent world shine without making it strain credulity that any one character would involved in absolutely everything of interest. 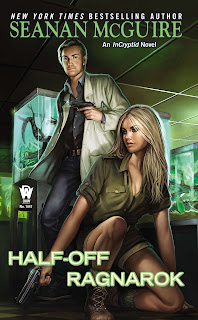