K. M. Szpara follows Docile, one of the most anticipated science fiction novels of 2020, with First, Become Ashes, a fantastic standalone adventure that blends pain and pleasure and will make readers question what is real, and what is magical.

His partner betrayed them to the Feds.

But Lark knows his magic is real, and he'll do anything to complete his quest.

Lark spent the first twenty-four years, nine months, and three days of his life training for a righteous quest: to rid the world of monsters. Alongside his partner Kane, he wore the cage and endured the scourge in order to develop his innate magic. He never thought that when Kane left, he'd next see him in the company of FBI agents and a SWAT team. He never dreamed that the leader of the Fellowship of the Anointed would be brought up on charges of abuse and assault.

He never expected the government would tell him that the monsters aren't real--that there is no magic, and all the pain was for nothing.

Lark isn't ready to give up. He is determined to fulfill his quest, to defeat the monsters he was promised. Along the way he will grapple with the past, confront love, and discover his long-buried truth.

I loved the first third of the book when I thought the story was, “A young man raised to believe magic is real has to deal with finding out that neither it nor the monsters he was raised to fight actually exist”. However, it soon became apparent that that wasn't where the book was going. The narrative was consistently invested in keeping readers off kilter as to whether/how magic was or was not real. I think we get an answer at the very end, but it feels like I spent the whole book being juked, so when it does finally pick a direction I’m tired instead of being excited that I finally know.

The main characters are adults when most of the narrative takes place, but it’s ambiguous as to how many of the flashbacks featuring descriptions of abuse took place when they were teens. That made me very uncomfortable. It’s a book about abuse and pain, and I don’t feel like I got enough aftercare as a reader.

The world building is minimal, I don’t have a good understanding of what day-to-day life was actually like before the book started, after the first couple of chapters the main details of life in the compound are all about the abuse. The abuse is definitely a focus, but it makes it hard to understand why anyone would stay. Not to question why anyone actually ends up staying in a cult, I mean, but you think there would be some camaraderie or warmth or positive *something* between the members, and if it was there the book doesn’t show it. It’s extremely focused on a handful of characters and doesn’t appear to care much about any of the others. The handling of the FBI agent also felt a little too neat, especially when we find out why she’s the one involved.

There’s a point of view character and a secondary character where I don’t know why they’re in the book. I understand what they do, but it’s so minimal that, for the secondary character, if she weren’t in the book at all I wouldn’t notice. It feels like she’s there so that one of the MCs can be uncompromising in a particular scene and still have things work out okay. The POV character who felt irrelevant technically had a different perspective than the other main characters, but most of their role in the story could’ve been absorbed by one of the others with very little change. It felt like they existed as a cautionary tale, ready to infodump when needed and stay away when they weren’t being useful.

It's very hard to pull off an ending that is basically, "hey, we can power the machines by laughter instead of screams" á la the movie "Monsters, Inc" (2001), when the first 70% of the book is dedicated to making it unclear whether the machines are powered at all by anything, or if electricity even works. Lark's rose-colored glasses and insistence that magic is real made it feel like he got to exit the book without growing at all. He escaped an abusive situation, and I'm glad for him, he seems like he's in a better place, but I really dislike the ending, I think it undercuts what was so good about the start of the book. What hooked me was the prospect of watching someone slowly realize that their life had been a lie, finally getting objective proof that they were wrong, and having to deal with the emotional wreckage of that. What happens instead is that we find out they were right that it's real, and his journey is that he learns he can just use a different source. I have so many questions about the version of reality where if you think magic is real you can just do magic and other people can see it too. That would utterly transform everything about the setting, it just couldn't be the same setting if people really casually did magic.

If this were a psychological horror novel I would love it so much, though the ending and a few middle scenes would have to change, but the “actually magic is real you just don’t have to power it with pain” ending undercuts all the rest of the stuff with the cult. The idea that “magic is real and requires pain, and nothing is worth the pain of children” can take you really cool places, and this book decided not to go to any of them, so at the end I just feel confused and lost. If you're going to hook me with the intro and then subvert the premise, your subversion needs to be better than playing it straight.

TW the ARC contains a Harry Potter reference 55% in which might not be in the final version. 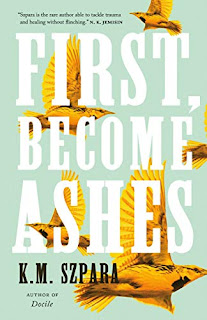