It's been almost a year since October "Toby" Daye averted a war, gave up a county, and suffered personal losses that have left her wishing for a good day's sleep. She's tried to focus on her responsibilities, but she can't help feeling like her world is crumbling around her, and her increasingly reckless behavior is beginning to worry even her staunchest supporters.

To make matters worse, Toby's just been asked to find another missing child...only this time it's the changeling daughter of her fellow knight, Etienne. Chelsea, a teleporter like her father, is the kind of changeling the old stories warn about: the ones with all the strength and none of the control. She's opening doors that were never meant to be opened, releasing dangers that were sealed away centuries before--and there's a good chance she could destroy Faerie if she isn't stopped.

Now Toby must find Chelsea before time runs out, racing against an unknown deadline and through unknown worlds as she and her allies try to avert disaster. Toby thought the last year was bad. She has no idea.

ASHES OF HONOR follows Toby following a scared teleporting teenager across the Realms to try and help them come home, while working through her own grief after the events of ONE SALT SEA.

There's always been a lot of attention paid to the logistics of how to get where in this series (which I appreciate), and since this book involves chasing someone who can travel much more easily than the protagonist can on her own, that means that at times this book felt like it might be fifty percent travel. That travel is rarely (possibly never) spent alone, and is used for a lot of great character-development and relationship-building... but wow was it a lot of travel.

It continues the grand tradition of changing who is in charge of somewhere I think at least once per book so far, I'm very pleased with the most recent adjustment. I'm extremely happy with the way a certain relationship has developed now that one character has exited the series. Actually, I'm not just happy, I'm ecstatic. Only my efforts to reduce the number of spoilers as much as possible is sparing you from my detailed and gushing praise of how much this relationship has changed and grown throughout the series, and how it feels like precisely the right time for the move made here. It feels like something that took a long time but happened naturally, and I'm so happy for them. The world-building continues to be excellent, and it feels like each book introduces us to just as many new characters as we can reasonably handle, letting some of the now massive cast of characters be in the background sometimes. I'm looking forward to seeing more of the characters who are the focus of this book, both new and old. It takes some time to process and reflect on some revelations from the last book, and I liked the brief but necessary attention paid even though it's been a year since we last saw everyone.

Now for the sequel check. I'm not sure if this really wraps up anything from the previous books. It did get a certain relationship to progress in a very satisfying and important way, but this book was mainly focused on continuing several things that I hadn't really thought of as being open. We learned a lot more about a character who had been kind of one-note so far (not boring, just predictable), and we get to see more of the residents of a place first introduced several books ago, along with their leader (returning for them, new for us). The whole main storyline starts in this book and wasn't present previously, and it's both introduced and resolved within this book. As for whether it leaves things for sequels to address... technically yes, but mainly in that relationship I mentioned earlier, I'm Very interested to see where that goes. The main character is the same as the previous books and her voice is consistent throughout the series so far. This would definitely make sense if someone picked it up at random. The main pieces of backstory which need explanation are handled really well, and because it introduces a new side of a character we don't know well and a brand new character who will probably matter a lot going forward, it's an idea jumping on point for people new to the series. As someone who's read the previous books I thought at first that it felt like a filler arc, but it's actually doing some very important things for the structure of the series. There need to be stories at regular intervals in a long-running series where someone could jump in if they want to, where they wouldn't have to go back to the very start if they just wanted to know enough for the most recent book to make sense. This feels like that kind of book. It's fully grounded in the world, it gives returning readers some very, very satisfying updates and a lot of new world-building, but also since this is the book where we meet one character and get to know another way better than we did before, it wouldn't matter much if a new reader hadn't known anyone of them at all. Obviously things will make more sense if you've read the whole series, but as a mid-series point to jump in, this one feels good.

It's not my favorite entry in the series, but it's one that feels structurally important for the longevity of the series as a whole, and I like where it went.

The ableism lingers in just a few places but it’s not totally gone yet. It’s definitely way less than in the earlier books, now limited to occasionally commenting on the relative sanity of the antagonists. 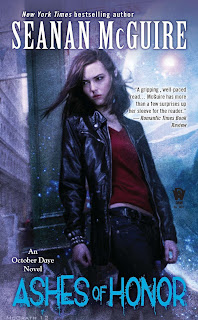