Things are not okay.

In the aftermath of Amandine's latest betrayal, October Toby Daye's fragile self-made family is on the verge of coming apart at the seams. Jazz can't sleep, Sylvester doesn't want to see her, and worst of all, Tybalt has withdrawn from her entirely, retreating into the Court of Cats as he tries to recover from his abduction. Toby is floundering, unable to help the people she loves most heal. She needs a distraction. She needs a quest.

Signs of Faerie's involvement are everywhere, and it's going to take all Toby's nerve and all her allies to get her through this web of old secrets, older hatreds, and new deceits. If she can't find Gillian before time runs out, her own child will pay the price.

Two questions remain: Who in Faerie remembered Gillian existed? And what do they stand to gain?

No matter how this ends, Toby's life will never be the same.

*Most editions of NIGHT AND SILENCE contain the novella SUFFER A SEA-CHANGE, which comprises the final sixty or so pages of the book as published.

NIGHT AND SILENCE is a story of loose ends, lost pieces, and forgotten things. So much has changed so completely that it's understandable and natural for a few to have gone astray, to be left behind. But some are not content to be forgotten, deciding instead to take twisted revenge on those who left. It begins broken, shattered in a way that aches beyond description. It's about helplessness, doing the motions when the motions are all that's left because maybe if you do them something will get better. Even that pained calm is broken by terror and blood, by a child in danger, and the strange and winding road to attempt a rescue where the chances of success seem to dwindle with every dead end and false trail.

This wraps up some very major things left hanging from previous books. The main storyline starts in this book and was not present in the last one. This is definitely pulling from the rest of this saga, but there is a major thing that is introduced and resolved at least for now here. It leaves a bunch of things to be addressed in later books, some of them ones that were started earlier and just not handled here, and some of them newly introduced and requiring more resolution later. The main character didn't change, it's still Toby. Lately she's done a lot more reflecting on how her priorities have shifted, but much of her voice is still the same. About half of the main plot would make sense if someone had just started with this book and didn't know about the rest of the series, but then a little past halfway through it would start to feel like it takes a wild turn into some very strange territory. To anyone who has been following the series, or at the very least started reading it a few books back, it should make a lot of sense and have some much needed catharsis. The first half is very focused on resolving this book and the immediate problems, but the true ending of this story delves into some things present since the very start of the series, and its very last moments are an emotional response to what happened in THE BRIGHTEST FELL. That book broke a lot of people, then NIGHT AND SILENCE came along to make sure that they don't quite get time to rest, but must instead claim peace where they can because it won't come easily.

This has an interesting place in the flow of the series because while the plot is engaging it's one that makes me want to re-read all the other books because it feels like there were clues I missed before. It has its own story, but most of the emotional weight of it relies on knowing which metaphorical shoes were waiting to drop. Even the main plot matters so much more if you know everything it took to be here. That's how this kind of series works (and for me is what I love about series novels), but for everything this resolves it leaves behind something at least as interesting in its place for late books to tackle. It makes each book feel like a ship of Theseus, where it always wraps up something, starts something new, and has a piece of its own, for at least a little while before that too is mostly remembered for how it's built upon by later entries in a new and wonderful way. 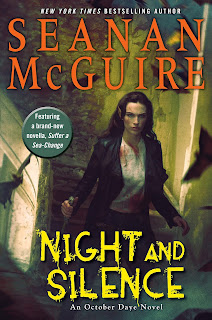