October Toby Daye, changeling knight in the service of Duke Sylvester Torquill, finds the delicate balance of her life shattered when she learns that an old friend is in dire trouble. Lily, Lady of the Tea Gardens, has been struck down by a mysterious, seemingly impossible illness, leaving her fiefdom undefended.

Struggling to find a way to save Lily and her subjects, Toby must confront her own past as an enemy she thought was gone forever raises her head once more: Oleander de Merelands, one of the two people responsible for her fourteen-year exile.

Time is growing short and the stakes are getting higher, for the Queen of the Mists has her own agenda. With everything on the line, Toby will have to take the ultimate risk to save herself and the people she loves most--because if she can't find the missing pieces of the puzzle in time, Toby will be forced to make the one choice she never thought she'd have to face again...

LATE ECLIPSES is a satisfying landing point for Toby Daye, offering mysteries and resolutions to things left open from the first three books. The exposition/refreshers early in the book are handled really well. They’re detailed enough to make sense if someone stumbled on this volume randomly or if it’s been a while since starting the series, but not so picky as to slow down the current story, and usually they’re necessary to the actual plot, so seamless that they don’t feel like exposition even though I know they are. A lot of the tension is from Toby not being believed by people who ought to know better, while being championed from unexpected quarters. I'm very happy about developments related to her Fetch, and was quietly amused by the surprise of "your deus-ex-machina" is not available this time", forcing the MC to get her answers the painful way, as befits a true October Daye novel. I didn't like this quite as much as an individual story as, for example, AN ARTIFICIAL NIGHT (my favorite so far), but this one is really important for tying up and redefining a bunch of stuff we already knew from the first few books. Every book so far has shifted the status quo for at least one knowe or realm in key ways, and this one reckons with the openings and weaknesses left by those changes.

Time for the sequel check! This entry relies heavily on knowledge of the first three books in a way that sometimes is wrapping up hanging threads, and sometimes is transforming our understanding of things we thought were resolved already. It does have a storyline which starts here and wasn't present previously, and the most major one was introduced and resolved within this book. It's not the last book and it specifically leaves a bunch of things to be answered later because they're too much to wrap up neatly here. The MC didn't change, and her voice is consistent with the previous books. This is the first time in the series where I can definitely say that it won't make a lot of sense without having read the previous books. It's a "series so far" climax, relying heavily on events from the first and third books, and lightly on the second. While the main plot could make sense without the other volumes, the tension won't be as high and the resolution won't be as satisfying without knowledge of ROSEMARY AND RUE and AN ARTIFICIAL NIGHT, at minimum.

There's still random sprinklings of ableist language, much less than in A LOCAL HABITATION, but not quite gone yet. I've heard it gets better on this front, so I'm watching for that turning point.

As an individual story, this one is fine, but as the next entry in this series it feels very pivotal. I'm very excited about certain interpersonal developments in Toby's various friendships and found-family relationships, and the resolution was satisfying as well as indicating a clear thread for later books to follow. 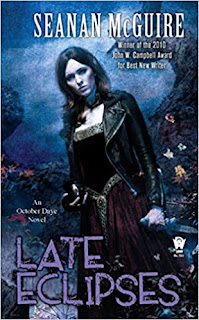