Wicked Saints by Emily Duncan (Something Dark and Holy, #1)

A girl who can speak to gods must save her people without destroying herself.

A prince in danger must decide who to trust.

A boy with a monstrous secret waits in the wings.

Together, they must assassinate the king and stop the war.

In a centuries-long war where beauty and brutality meet, their three paths entwine in a shadowy world of spilled blood and mysterious saints, where a forbidden romance threatens to tip the scales between dark and light. Wicked Saints is the thrilling start to Emily A. Duncan’s devastatingly Gothic Something Dark and Holy trilogy..

TITLE: Wicked Saints
AUTHOR: Emily Duncan
PUBLISHER: Wednesday Books
YEAR: 2019
LENGTH: 385 pages
AGE: Young Adult
GENRE: Fantasy
RECOMMENDED: No* (I loved this book but did not finish the sequel and do not plan to read the third book at this time. After reading this originally I found out that the premise of the series relies on a bunch of antisemitic tropes. Due to this and the fact that the second book was confusing and I did not enjoy it at all, I do not recommend this book/series. I’ve left my original review intact below.)

If you like magic, blood, forbidden glances over a multitude of wounds (literal and otherwise), beleaguered princes, and a darkly brooding danger boy chased by a conflicted magic girl, read WICKED SAINTS.

This is one of those books where I loved how it felt to read it, but when I try to list what occurred the intricacies escape me and it feels like only a couple of things actually happened. I think the prince is my favorite character, mostly because his goals make more sense to me personally, but both MC's are cool in different ways. I was a little concerned that the "lovers" part of "enemies to lovers" was happening a bit quickly, but then the book reminded me that it's a trilogy and things have time to get complicated, in this case by means of a dizzying but oddly inevitable ending. 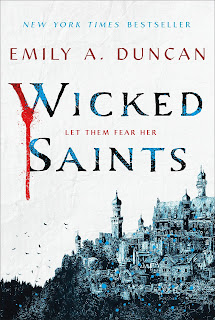 Labels: Recommended: No YA: Fantasy