Things are starting to look up for October Toby Daye. She's training her squire, doing her job, and has finally allowed herself to grow closer to the local King of Cats. It seems like her life may finally be settling down...at least until dead changelings start appearing in the alleys of San Francisco, killed by an overdose of goblin fruit.

Toby's efforts to take the problem to the Queen of the Mists are met with harsh reprisals, leaving her under sentence of exile from her home and everyone she loves. Now Toby must find a way to reverse the Queens decree, get the goblin fruit off the streets--and, oh, yes, save her own life.

And then there's the question of the Queen herself, who seems increasingly unlikely to have a valid claim to the throne....To find the answers, October and her friends will have to travel from the legendary Library of Stars into the hidden depths of the Kingdom of the Mists--and they'll have to do it fast, because time is running out.

CHIMES AT MIDNIGHT begins with upheaval and a race against the clock, then doubles down with a deadline etched in blood. A little past a third of the way through the book, I was thinking to myself that this all seemed too easy, too breezy for our long-suffering and self-sacrificing hero. I was concerned that the story might start feeling rote, though it wasn't quite yet. It did not stay easy. The way the characters handle the particular series of complications that arise out of a very shocking event instantly pulled me back in and I stayed engaged all the way to the end. The twist/event as it happens feels perfectly inevitable and foreseeable, and yet lands as a horrific surprise with devastating consequences. It turns a perennial thorn in Toby’s side into the main antagonist in a way that feels suitably epic for a clash that has been slowly building since the start of the series, but so immediately understandable that if someone came across this at random they would grasp the general shape of the conflict even without the weight of all that history. I like the new characters, I like the returning characters, I’m glad that May finally said something about having felt sidelined for the last several books because I was feeling that too. This is a solid entry in the series that feels like it heralds a shift in upcoming books. Pretty much every one of these has changed who is in charge of somewhere, but this time that attempt is the point of the plot and not seemingly an effect of whatever the characters were actually trying to do. This most recent change has been a long time coming and I'm glad it's here.

Time for the sequel check! This continues several things that were set up in previous books, perhaps most importantly one which was introduced and then seemingly went nowhere in the previous book, serving there just to further the development of a relationship, but it’s picked up here and has a much more central role. There is an adjacent but technically different major storyline which starts in this book and wasn’t present in any of the previous ones, as well as a very major thing which is introduced and resolved here. This is not the last book, and it leaves several things to be picked up in later volumes. The ends of the books in the series have a stylistic thing that I like very much, where somewhere in the last chapter or two, the main character will acknowledge major things that are currently unresolved. It’s not a list of everything, that would feel tedious and would break the fourth wall too much, but it’s nice as an acknowledgment that the character knows that the resolution in this book didn’t fix everything, didn’t close everything, and gives kind of an idea of what might be coming in the next few books. I like it as a style choice, especially in a long running series like this. The main character didn’t change, and I’m pretty sure isn’t going to change, and her voice is consistent with the previous books. I do think this book would make sense, at least mostly, if someone started with it random and hadn’t read the previous books. Just like the previous book would’ve been a pretty okay jumping in point for someone new to the series, I think this one is as well but in a different way. If someone told me they intended to start with this one I would recommend that they at least go back one book before moving forward, but starting here (or only going back this far if doing a re-read in anticipation of a new release) would be fine. One thing which distinguishes it from the previous entries is that Toby is in a relationship with a particular character from the start of the book, and this probably marks my last review where it will be possible to conceal who that is without talking in circles. As always I really do think people should start with the first book in the series, but this story would make sense as long as it’s not your first introduction to the fae and Faerie. 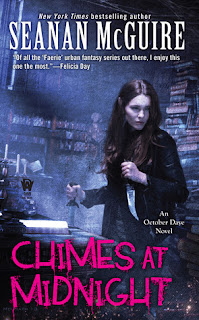