Raven Stratagem by Yoon Ha Lee (The Machineries of Empire, #2)

Captain Kel Cheris is possessed by a long-dead traitor general. Together they must face the rivalries of the hexarchate and a potentially devastating invasion.

When the hexarchate's gifted young captain Kel Cheris summoned the ghost of the long-dead General Shuos Jedao to help her put down a rebellion, she didn't reckon on his breaking free of centuries of imprisonment - and possessing her.

Even worse, the enemy Hafn are invading, and Jedao takes over General Kel Khiruev's fleet, which was tasked with stopping them. Only one of Khiruev's subordinates, Lieutenant Colonel Kel Brezan, seems to be able to resist the influence of the brilliant but psychotic Jedao.

Jedao claims to be interested in defending the hexarchate, but can Khiruev or Brezan trust him? For that matter, will the hexarchate's masters wipe out the entire fleet to destroy the rogue general?

RAVEN STRATAGEM is an excellent continuation of the story begun in NINEFOX GAMBIT, shown through new eyes and exploring more of the people within the pervasive and all-consuming empire via fantastic space battles and subtle political machinations.

The prose is idea-dense in a way that makes it difficult to describe what happened, but each moment is fascinating. I didn't ever feel lost, just like I knew what all the pieces were but not how they fit together until towards the end.

This series in general and this book in particular are relentlessly queer, it's so great. There's consistent in-universe terminology which separates physical form from gender identity, and several pronoun changes are effortlessly handled. I use the term "casually queer" to describe books where characters are queer and it's no big deal and this feels this the epitome of what I mean when I use that term. I couldn't even tell you for certain that anyone was allocishet, it's just not that kind of setting. Some of this was in the first book, but it's very obvious in this one and I loved it.

The characterization is really good, both for individuals and for the various factions, especially since the factions have such an outside roll in everyone’s personalities. There was this nice synergy where just by learning someone’s faction I could know a little bit about them, and if they were more than a minor character I would get even more as the text spent time with them. It was a very graceful way to handle such a large cast, and the faction naming conventions were very helpful in this regard. The faction politics were a perfect mix between unwieldly grandiose (as befits a centuries-old empire) and understandable in their details. It explores how people fit in, why they don't, and what happens when they have to choose between breaking for the system and breaking it.

On to the sequel check! It wraps up several things left hanging from the previous book. The main storyline starts in this book and wasn't present in the first one. Several major things are introduced and resolved within this book. It doesn't leave many very specific things to be picked up in the next book, but it leaves many grand things not yet accomplished because they're too big for one volume, and the ending makes it clear that they will be the topic of the final book. The MC changed, almost all of the narrators were new this time around and they all had distinctive voices, it was pretty easy to keep track of who was who and remember their relevant motivations. I think this would almost entirely make sense if you picked it up at random and didn't know about the series. By changing narrators it naturally incorporates a lot of exposition from different angles than the ones in the first book, which does some very cool things: new information is available, old information feels new because it's filtered through different minds, and exposition felt like just part of the story. I definitely recommend starting with the first book, its whole point is to immerse you in Jedaro's backstory so that the events in this book have emotional weight behind them, but the actual plot is very understandable, even without the first book.

This keeps much of the style I liked from the first book, we're given even more ways to understand this system. I love this series and I’m definitely going to read the next book. If you liked the first one you'll love this piece of the saga. 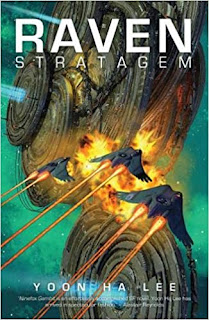