1. The inevitable or irresistible course of events.

Verity Price is back on the West Coast and getting back into the swing of the family business: cryptozoology. She's rescuing cryptids from bad situations, protecting them from monster-hunters, and generally risking life and limb for the greater good, with her ex-Covenant partner/husband, Dominic, by her side. Her ballroom dance career is behind her...or so she thinks.

When Verity gets the call from the producers of Dance or Die, the reality show she almost won several years before, she finds the lure of a comeback impossible to resist, and she and Dominic are off to L.A. for one last shot at the big time.

Of course, nothing is that simple. When two of her fellow contestants turn up dead, Verity will need every ally she can find--and a couple she wasn't looking for--in order to navigate the complicated steps of both the tango and a murder investigation without blowing her cover. It doesn't help that her official family backup is her grandmother, Alice Price-Healy, who thinks subtle is something that happens to other people.

Winning this competition may have just become a matter of life and death.

CHAOS CHOREOGRAPHY offers Verity one last hurrah as Valerie in the world of competitive dance when “Dance or Die” gets a bit too literal for anyone’s comfort.

After how much Verity talked about dance last time she was narrating, I'm glad we get the chance to see her as Valerie. In the previous books it was obvious how much she loved the world of cryptozoology, here we get a tour of her love of dance rather than just being told about it. It shows enough of the competition to immerse the reader in that world before Verity starts having to take over for Valerie more and more as the body count becomes decidedly non-zero. I love Valerie as a narrator, and the family member who drops in to surprise her was a violent delight.

This doesn't wrap up anything from the book directly prior, but it does have a lot of closure from the last time we had Verity as narrator, with a nice follow-up to some events in the very first book. The main storyline starts here and wasn't present in the last book. Several major things are introduced and resolved here. It's not the last book, and it ends by intimating a rather spectacular status change which leaves a lot for future sequels to pick up. The main character is different from the last book but she's the same from the first two books in the series. Verity's narrative voice is distinct from Alex, the other main narrator so far. This would probably make sense even if someone read this without having read anything else in the series, but it is a pretty direct follow-up to the events of DISCOUNT ARMAGEDDON and MIDNIGHT BLUE-LIGHT SPECIAL.

This is a great entry in the series, and I like having an example of the series revisiting an earlier narrator after having moved on to someone new. 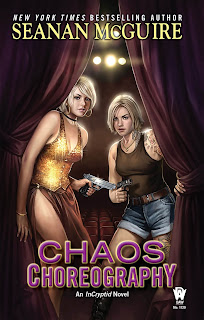