October "Toby" Daye is finally doing all right—and that inevitably means it's time for things to take a turn for the worse. Someone has kidnapped the sons of the Duchess Dianda Lorden, regent of the Undersea Duchy of Saltmist. To prevent a war between land and sea, Toby must not only find the missing boys, but also prove that the Queen of the Mists was not behind their abduction. She'll need all her tricks and the help of her allies if she wants to make it through this in one piece.

Toby's search will take her from the streets of San Francisco to the lands beneath the waves. But someone is determined to stop her—and whoever it is isn't playing by Oberon's Laws. As the battle grows more and more personal, one thing is chillingly clear. When Faerie goes to war, not everyone will walk away.

Where LATE ECLIPSES was a brief landing to wrap up major threads from the first three books, ONE SALT SEA is a point of inflection. It changes the status of various relationships: rivalries, loves, and lurking villains alike, and makes Toby more aware of long-standing and slow-moving forces with debts finally coming due. As a pair of books, they feel distinct from the first three because they’re straddled between wrapping up large plot points and deep grudges, and making space for Toby to tackle new problems in the future. Certain characters have had a constant presence until now, either frequently appearing on the page or taking up a great deal of Toby’s thoughts and emotional bandwidth in the background, and this feels like a moment of clearing the air and finally dealing with hanging threads, good and bad.

I loved the introduction to the Undersea, I hope to see more of it in the future though Toby’s fear of water will likely reduce how often that can plausibly occur. I hadn’t been tracking this specifically until now, but I think every book so far has introduced at least one new magical location, gradually building the world as it’s needed rather that flooding readers with a list of all the places they might eventually go in the series. The mix of characters who have different levels of knowledge even though they’re all at least partially fae helps to mean that explanations feel like either brief and unobtrusive recaps or they’re fascinating discussions, as there’s always a natural reason to need to offer this explanation at that particular moment.

On to the sequel check! This book wraps up a bunch of very major things from the previous book. It either addresses them completely or puts them in a state that feels like it could be on pause briefly or for the rest of the series (things are tricky when not even death is necessarily final in these books). It has a major storyline which wasn't present in the previous books. There's definitely an episodic nature to this series, where even if many things continue there's always whatever big problem Toby has to solve that was a big enough event to fill a book about it. There are several major things which are introduced and resolved within this book. The ending explicitly leaves things to be picked up later, I don't know if they'll necessarily be addressed in the very next book, but this series has been good about having some kind of succinct sum-up of a few major things which are still unresolved when the book ends. The MC is still the same person, I don't anticipate that changing since the series is named for her. Her voice has been consistent through the series so far. Because of the way this book feels like an inflection point, I actually think this would mostly make sense if someone picked it up at random without knowing about the series. The necessary background details are explained enough to give context without feeling like infodumps, and the main plot is introducing a new realm and new players in a way that feels like a pretty good mid-series introduction.

I like this one a lot and I'm very excited to keep reading the series. The ending has some fascinating information with cool (but also sad) implications for future developments. 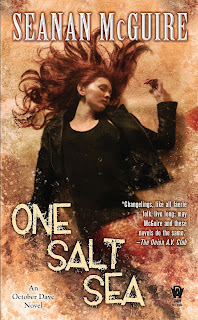