Politics have never been October “Toby” Daye’s strong suit. When she traveled to the Kingdom of Silences to prevent them from going to war with her home, the Kingdom of the Mists, she wasn’t expecting to return with a cure for elf-shot and a whole new set of political headaches.

Now the events she unwittingly set in motion could change the balance of modern Faerie forever, and she has been ordered to appear before a historic convocation of monarchs, hosted by Queen Windermere in the Mists and overseen by the High King and Queen themselves.

Naturally, things have barely gotten underway when the first dead body shows up. As the only changeling in attendance, Toby is already the target of suspicion and hostility. Now she needs to find a killer before they can strike again—and with the doors locked to keep the guilty from escaping, no one is safe.

As danger draws ever closer to her allies and the people she loves best, Toby will have to race against time to prevent the total political destabilization of the West Coast and to get the convocation back on track…and if she fails, the cure for elf-shot may be buried forever, along with the victims she was too slow to save.

Because there are worse fates than sleeping for a hundred years.

*Most editions of ONCE BROKEN FAITH contain the novella DREAMS AND SLUMBERS, which comprises the final seventy or so pages of the book as published.

ONCE BROKEN FAITH drops Toby into the middle of a high-tension political debate which will decide the fate of many people she cares about, now and in the future... and hands her a murder to solve. Every once in awhile Toby needs to have a locked house murder mystery, I think it's good for her, and this one is pretty great. It's a fantastic opportunity to see people under pressure, especially ones who Toby hasn't been around before. I love political wrangling, especially in a fantasy setting, so this was a real treat. The book doesn't focus on the political stuff quite as much as it could, because Toby does not care about the politics in less she is forced to, but I liked how much I got. One of my favorite things on the political side of the plot is that we get to hear what other people in Faerie think about some particular issues that we have mostly discussed from Toby's perspective, or from the perspective of those who love her.

This wraps up a very major thing left hanging from the previous book (the entire reason this book exists is to wrap up this major thing) and it handles some more minor things along the way. It does have a storyline which starts in this book and was not present in the previous one. There are several major things that are introduced and resolved here. I think this does leave several things to be addressed in future books. Some of those are ones that earlier books established and this one merely did not resolve, but the conclusion here lays out something that will take a significant amount of time and a lot of work to complete, whether or not the main character is the one doing that work. As always with this series the MC is the same and her voice is pretty consistent with the previous books, but this one does take time to note that the kind of things she is worried about has changed since the start of the series because of the ways that she has changed. Because of this book's nature as a locked-Knowe murder mystery, I do think it would make sense for the most part if someone read it without having read any of the previous books. What it excels at is being a mid series catchup point for anyone who didn't start from the beginning but instead started with ONE SALT SEA (book 5) or with A RED-ROSE CHAIN (book 9). I had remarked in my review for A RED-ROSE CHAIN that either that book or its sequel would probably be a pivot point that would let someone join the series, and ONCE BROKEN FAITH bears that out. It greatly expands the way that the reader set up to think about Faerie, about the kingdoms, and the way they relate to each other, introducing us to a bunch of new characters and showing older ones in stressful situations. Admittedly I'm deep enough into these books that it might be hard for me to gauge whether they would make sense without all the backstory, but I'm very confident that the murder mystery angle of the plot will be very easy to follow for a new reader and that, at least, is self contained. The series is very good about having succinct summaries of what happened previously and why it matters, done in a way that conveys at least a little of the relevant emotional context without so many details as to confuse someone new. All of this done in a way that feels like reminding a returning reader of what they already know, neither talking down nor assuming they didn't remember.

I like that Toby is pausing to think about the children and children-no-longer who are and have been under her care. In this book's capacity as an inflection point, the slumber party at the start of the book serves to remind us just how many teens and recent teens have had their lives changed by Toby. When thinking about these books as they exist as sequels to other books I don't want to lose track of the way that there's a lot of slow changes and really good character work happening in the background and the little moments of every entry in this series. I haven't mentioned Karen in these reviews, because she hasn't played a role that I felt needed to be mentioned specifically in any of the others, but she's been around since AN ARTIFICIAL NIGHT (book 3) and I think we're starting to hit the point where she's becoming a secondary character instead of a minor one. Her existence in the series has quietly made the difference in a number of books, and it feels like something's going on where we might be poised to learn that something more is going on with her powers, but whatever it is hasn't quite happened yet. Likewise Quentin and Raj had been fantastic characters to watch grow up. They matter so much to the fabric of this series because they matter to Toby, and whether they're more of minor characters or secondary characters in any one book doesn't matter much, because if you took them out the series would be the worse for it. The tension between Toby's need to care for people and the importance of their own autonomy is present in almost all her relationships, but it's most obvious in how she relates to to the various teens (and soon young adults) in her life, second only to the way it plays out with Tybalt. This book in particular showcases this tension with Quentin and with Tybalt, and one of the things I appreciate is that she is in frequent conversation with them about how things are going (even if they're not going well). 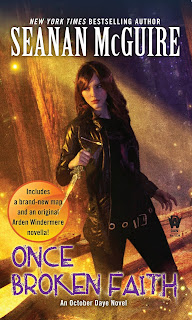