Hundreds of years ago, the Selkies made a deal with the sea witch: they would have the sea for as long as she allowed it, and when the time came, she would call in all their debts at once. Many people assumed that day would never come. Those people were wrong.

When the Luidaeg—October "Toby" Daye's oldest and most dangerous ally—tells her the time has come for the Selkies to fulfill their side of the bargain, and that Toby must be a part of the process, Toby can't refuse. Literally. The Selkies aren't the only ones in debt to the Luidaeg, and Toby has to pay what she owes like anyone else. They will travel to the fabled Duchy of Ships and call a convocation of the Selkies, telling them to come and meet the Luidaeg's price...or face the consequences.

Of course, nothing is that simple. When Dianda Lorden's brother appears to arrest Dianda for treason against the Undersea, when a Selkie woman is stripped of her skin and then murdered, when everything is falling apart, that's when Toby will have to answer the real question of the hour.

*Most editions of THE UNKINDEST TIDE contain the novella HOPE IS SWIFT, which comprises the final fifty or so pages of the book as published.

THE UNKINDEST TIDE is the story of the Selkies and the Roane, and the broken past that brought them here. It begs to know when will children stop paying for the mistakes of their ancestors.

This is a good resolution to a conundrum that has been hanging over the series since ONE SALT SEA, and over the Luidhaeg for millennia. I've been looking forward to this book for most of the series and I like how it handled things. I'm glad that it takes on a pretty important sidequest, it lets the big important stuff feel focused, not needing to stretch to pad out the whole book. The sidequest was good, it moves some characters around and lets us see more of someone that Toby hasn't really been around at all since she first met him.

This book exists to wrap up a bunch of stuff from earlier books. It does have a storyline which wasn't present previously, which begins and is resolved here. It leaves something pretty big to be resolved later on in the series. The main character hasn't changed. I will note that there are bunch of novellas that fit in the series, some of which have comprised the final parts of various main series books. Toby sounds distinct from those narrators, but in the main series it's all Toby. The middle section of this book would make sense even if you hadn’t read any of the others. But, this book is the culmination of some thing that was first explicitly stated in ONE SALT SEA (book five), and I think someone would need to go back at least as far as A RED-ROSE CHAIN (book nine) in order to have enough grounding for the minimum backstory needed to understand how we got here and why the events matter. Every once in a while there’s a book in the series which exists mostly to be the culmination of things begun earlier. It has its own story but that story has such a complex and important history that it really needs that context in order to have the right emotional weight. The specific plot is explained, but making sense isn't enough to make it feel like it matters if you read this without the context at least a few of the earlier books.

I've suspected for a while that a certain nearly-magicless character is more than she appears. I don't know if my first suspicions were correct (I thought she might be a traitor, or actually have strong magic and is hiding it), but some conversations happened here that mean I'm very sure something is going on.

I like what's going on with Toby, love what's going on with Tybalt (healing after trauma is difficult but he seems in a much better place, emotionally). Their relationship is really great, it shows the work, and the way they handle disagreements and hold to necessary boundaries is really heartening to read. I'm always happy to see more of Quentin and Dean (together or separately), and I'm slowly warming to Gillian. 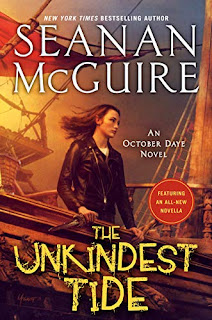