Rose Marshall died in 1952 in Buckley Township, Michigan, run off the road by a man named Bobby Cross--a man who had sold his soul to live forever, and intended to use her death to pay the price of his immortality. Trouble was, he didn't ask Rose what she thought of the idea.

They have names for her all over the country: the Girl in the Diner. The Phantom Prom Date. The Girl in the Green Silk Gown. Mostly she just goes by "Rose," a hitchhiking ghost girl with her thumb out and her eyes fixed on the horizon, trying to outrace a man who never sleeps, never stops, and never gives up on the idea of claiming what's his. She's the angel of the overpass, she's the darling of the truck stops, and she's going to figure out a way to win her freedom. After all, it's not like it can kill her.

SPARROW HILL ROAD meanders back and forth across the US and through time as Rose guides her fellow departed, and nudges those who have a chance to stay with the living.

This is structured as a collection of short stories following one ghost's journey, woven together until the final tale is the culmination of everything that came before. As every ghost story has echoes and variations, these too have repetition in the framing but distinction in the details, with Rose's voice as a throughline. I like the cadence of the sections individually and the book as a whole. 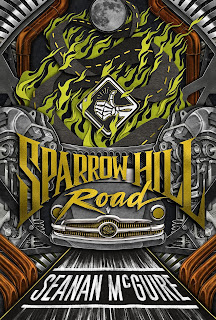