Under the Pendulum Sun by Jeannette Ng

Catherine Helstone's brother, Laon, has disappeared in Arcadia, legendary land of the magical fae. Desperate for news of him, she makes the perilous journey, but once there, she finds herself alone and isolated in the sinister house of Gethsemane. At last there comes news: her beloved brother is riding to be reunited with her soon - but the Queen of the Fae and her insane court are hard on his heels.

Subtle and enthralling, UNDER THE PENDULUM SUN is the story of a young woman who follows her missionary brother to the lands of the fae, only to discover that the truth hurts more than any lie.

With a slight grin that never reaches its eyes, this book whispers, “I’m not trapped here with you, you’re trapped here with me.” It’s a mostly quiet story which has some elements of horror based around a visitor’s everyday routines under the inconstant light of the pendulum sun in the lands of the fae. It runs on conversation, small moments, and fridge-horror realizations as slowly learning what this place is casts a new light on everything we’ve seen done there.

The world-building is deep and beautiful. It’ll definitely help to have some familiarity with some version of the christian bible and various apocrypha, but their use and most references are contextualized and explained very well within the story so it should make sense without that. It mostly adds poignancy, and gets to the heart of some scenes faster if you already know the passages and parables being referenced. The setting and various denizens are slowly revealed as the story strolls along, saving wonders for calm moments of revelation.

Brief warning about triggering tropics: Due to a historical connection between descriptions of changelings and autistic people, the depiction of changelings in this book may be triggering to some readers. The book does not address autism specifically, but the particular list of "what makes a changeling inhuman" in this book has a high degree of overlap with allistic descriptions of autism and autistic people, and actively triggers disassociation in some of the characters. I don't know if the parallels were intended, but they are uncomfortable, especially given the fates of the characters involved. 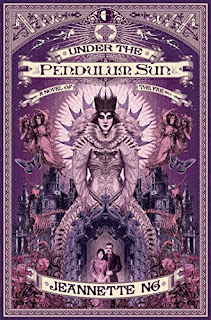