Things are looking up.

For the first time in what feels like years, October “Toby” Daye has been able to pause long enough to take a breath and look at her life—and she likes what she sees. She has friends. She has allies. She has a squire to train and a King of Cats to love, and maybe, just maybe, she can let her guard down for a change.

Or not. When Queen Windermere’s seneschal is elf-shot and thrown into an enchanted sleep by agents from the neighboring Kingdom of Silences, Toby finds herself in a role she never expected to play: that of a diplomat. She must travel to Portland, Oregon, to convince King Rhys of Silences not to go to war against the Mists. But nothing is that simple, and what October finds in Silences is worse than she would ever have imagined.

How far will Toby go when lives are on the line, and when allies both old and new are threatened by a force she had never expected to face again? How much is October willing to give up, and how much is she willing to change? In Faerie, what’s past is never really gone.

It’s just waiting for an opportunity to pounce.

A RED-ROSE CHAIN features a villain who uses the letter of the law to shred the spirit of the law until it is something tortured, mutilated, and utterly unrecognizable. Toby has three days to prevent a war, but discovers some prices are too high to pay, even for peace.

There’s something kind of glorious in an utterly reprehensible villain. Someone presented at first as having done something bad, as being an antagonist, and then as the story builds and events unfold it becomes clear that they had so many opportunities to be good and instead decided to be cruel. There’s a twisted logic to it, something horribly consistent about it. Where the rules they found themselves with and what they’re willing to do means that in order to feel in control they extend pain, horror, and fear to everyone in their reach. The villain here is someone who by all the standards of Faerie could’ve had a quiet and good life, and instead decided to make everyone else miserable to fit his own agenda. By the time we get involved there is no question of the depths of his cruelty, only how much we could bear to learn in one book. He’s a villain by dint of never having enough, always wanting more, especially when “more” means that other people lose. I love this book, I hate the villain, and I like the ending.

This wraps up a few major things left hanging from previous books. While the conditions for it the main storyline were set up previously, the inciting incident and all that follows are unique to this book, with some things introduced and resolved here. This is not the last book and there are definitely some things for later books to resolve. This is Toby’s series and she is still the narrator. Most of the plot would make sense if someone started with this and didn’t know about the rest of the series. The things that are necessary I explained pretty well, and because the rather dramatic inciting incident happens at the start of the book and is the kind of thing that would make sense even without the rest of the series, do do think someone could enjoy this if they picked it up at random. This is now deep enough in the series that I understand why someone might try to start partway through even though I don’t recommend it, but this feels like it’s definitely in the middle of an arc in the series. If you’re determined to begin in the middle, this represents a significant enough change in the status quo that it might be a good landing place. If I’m right about the cadence of the series either this or its direct sequel will probably be the kind of pivot point that would let someone join the series here without too much trouble.

I have a few thoughts about the course of the series. This mentions something left hanging at the end of ONE SALT SEA that hasn’t been resolved yet, in a way that feels to me like a nudge to confirm that the author hasn’t forgotten about it, but in a way that works either as a reminder or a brief introduction to that bit of backstory if someone decided to start here. I am keeping my eye a few things that were put on pause for a specific duration that feel like their time is almost up, but I don’t know how quickly time will move between this book and the next. I guess that either next book or two books away will be the time, and I’m looking forward to seeing if I’m right. 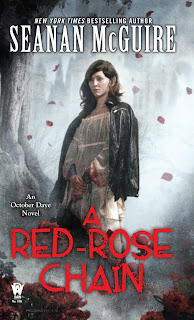