Mexican Gothic is slow burn horror built on gaslighting, sexism, and a fantastic sense of aesthetic.

If that sounds great then you’ll definitely love the first half of this book. How you feel about the second half will probably depend on how you feel about the cause of some of the paranormal horror elements once it becomes more prominent in the story. I happen to be someone who is fascinated by this particular thing and so I switched from being moderately creeped out to being very excited overall (still creeped out by individual scenes). The second half felt much faster-paced than the first, but that might just be because I got way more into the story at that point. My best guess for how it’ll feel for someone who was creeped out to start and then has any fear related to the eventual reveal is that it’ll ramp up the horror pretty steadily in the second half, with each scene building on the previous one until the very striking finale maybe lets you relax (but also maybe not, it’s that kind of ending).

I love the aesthetic, I love the pacing, the plot was slower than I’m used to but it works really well here, and I adore the second half. The MC managed to be a pretty reliable narrator even while being severely gaslit so while I didn’t always know who she should trust or what was real, I never felt misled as a reader.

The explanations after the secret is revealed worked well, clarifying earlier events without making them less creepy (whether they’re retroactively even creepier depends on how you feel about the explanation). I love the ending, it felt like a sigh of relief after an exhausting run; everything isn’t quite back to normal but it’s at least calmer at the moment.

The way that sexism is used as a horror element was deft, subtle, and very effective. The plot happens because the MC is being coerced into helping on the promise of being allowed to further her education, and she has to obtain that permission from her father. Once she’s at the house she feels trapped at first because she doesn’t want to abandon her cousin and forfeit a chance at higher education on her father’s sufferance, then later she’s trapped because she’s not allowed to leave the house. The way the personal and social pressure combine to coerce her helped to make it seem reasonable (or at least understandable) that she didn’t leave at the first sign that something was very wrong. 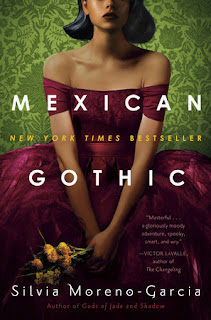