*Most editions of THE BRIGHTEST FELL contain the novella OF THINGS UNKNOWN, which comprises the final sixty or so pages of the book as published.

THE BRIGHTEST FELL pushes Toby, robbing her of things held most dear, then challenging her to lose even more for their return. Gathering up the jagged edges of things left unfinished, some perhaps beyond hope of repair.

This is a journey book, and it's been a while since we truly had one of those. Oh she's traveled in the others, often extensively between the various knowes, but this kind of journey is different and refreshing. I would say it's nice to see Toby in this kind of strange setting, but it's not nice, per se, it's a cruel position that she's in. However it is a bit unsettling in a good way to see her without her usual help, on stranger roads than to which she has recently been accustomed, and with an even odder traveling companion by virtue of uneasy peace. Some of the more recent books had begun to feel like every solution would involve Tybalt and the shadow roads, so breaking that pattern and returning to a cadence reminiscent of the early books was nice. I particularly love one of the places that is revisited here. It was the scene of my favorite book in the series so far, and seeing how it has changed since then was very welcome, even as it distressed the characters to return. The treatment of the Luidaeg is especially good here. The series has been walking a careful road between having her help Toby and maintaining her well-deserved reputation as the monster under Faerie's metaphorical bed. There's something especially cruel in getting what you wish for at a price you can only technically afford, and this story uses that to great effect. The last book offered an utterly reprehensible villain, here we have someone who has been decidedly villainous in the past, but is finally making good on the inklings of decency we’ve recently glimpsed. I love this complexity, Toby has had a long time to hate him, and wherever she ends up on the matter, the journey is fascinating. We also get to see two people whose existence have been teased for a while, both someone Toby knew well and someone she never had the opportunity to meet.

This wraps up something major that was left hanging from previous books, and addresses even more that has been a mystery in the background since the start of the series. The main storyline starts in this book and was not present in any of the previous ones. That thing is introduced and resolved here, though not necessarily happily. It leaves a lot to be addressed in later books, the way this both resolves its own plot line and opens up so much more to handle later is really well done and I liked it a lot. The main character didn't change, at least she didn't change who she is, but the way she thinks about some things is altered during the book in a way that makes her reflect on the way she moves through the world. I think this would make sense if you started here and didn't know any of the other books, as long as this was not your introduction to Faerie. If ONCE BROKEN FAITH was an inflection point, THE BRIGHTEST FELL is transformative. It has this great balance between being self contained and reminding us of all the places we've been before, which makes it an okay place to happen upon the series randomly (though I do think that A RED-ROSE CHAIN or ONCE BROKEN FAITH would be better places to jump in than this). 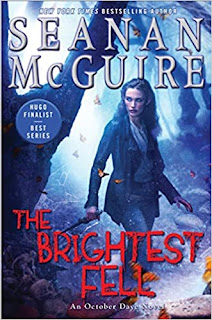