1. Any creature whose existence has been suggested but not proven scientifically. Term officially coined by cryptozoologist John E. Wall in 1983.

2. That thing that's getting ready to eat your head.

The Price family has spent generations studying the monsters of the world, working to protect them from humanity--and humanity from them. Enter Verity Price. Despite being trained from birth as a cryptozoologist, she'd rather dance a tango than tangle with a demon, and when her work with the cryptid community took her to Manhattan, she thought she would finally be free to pursue competition-level dance in earnest. It didn't quite work out that way...

But now, with the snake cult that was killing virgins all over Manhattan finally taken care of, Verity is ready to settle down for some serious ballroom dancing—until her on-again, off-again, semi-boyfriend Dominic De Luca, a member of the monster-hunting Covenant of St. George, informs her that the Covenant is on their way to assess the city's readiness for a cryptid purge. With everything and everyone she loves on the line, there's no way Verity can take that lying down.

Alliances will be tested, allies will be questioned, lives will be lost, and the talking mice in Verity's apartment will immortalize everything as holy writ--assuming there's anyone left standing when all is said and done. It's a midnight blue-light special, and the sale of the day is on betrayal, deceit...and carnage.

MIDNIGHT BLUE-LIGHT SPECIAL has a relentlessly upbeat tone, somewhere between "laugh through the pain" and "if you keep smiling as a distraction they'll be easier to sucker-punch later". It's optimistic without being glib, a mood carried by the protagonist's attitude that an okay resolution to the current crisis could end up being one where she doesn't personally survive but her friends and the myriad cryptids of the city do. This creates a genuinely tense atmosphere without constantly feeling doomed. I love this attitude and it's handled really well here.

Now for the sequel check. This wraps up a pretty major thing left hanging by the first book. The storyline is dependent on a situation set up by the first one, but the actual main storyline is self-contained here. A very major thing is introduced and resolved within this book. Something very important is left open to be resolved later, or to at least get interesting updates on how it isn’t resolved yet. The MC is the same from the previous book, but there is a section with an alternate narrator and they feel very different from the main protagonist. This would definitely make sense if someone started with it and hadn’t read the first book, but it’s so early in the series that I would hope if someone picked this up and realized it was book to they were just curried book one. If they didn’t and they carried on anyway, they should have a good time because the relevant backstory is very neatly explained, and it’s also early enough in the series that we're still learning the lore and it isn’t yet too deep to wade through.

I like this one a lot, it builds on the first book in some really great ways and I'm looking forward to reading more about the Price family. The chapter-header quotes are delightfully macabre and make me feel like I've already met a lot of the family even though the series hasn't formally introduced us yet. The world-building is handled really well, conveying the general mood and what kinds of things to expect, but staying away from being a massive list of every possible cryptid they might encounter. 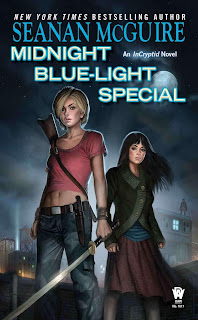