Some people are extraordinary. Some are just extra. TJ Klune's YA debut, The Extraordinaries, is a queer coming-of-age story about a fanboy with ADHD and the heroes he loves.

Nick Bell? Not extraordinary. But being the most popular fanfiction writer in the Extraordinaries fandom is a superpower, right?

After a chance encounter with Shadow Star, Nova City’s mightiest hero (and Nick’s biggest crush), Nick sets out to make himself extraordinary. And he’ll do it with or without the reluctant help of Seth Gray, Nick's best friend (and maybe the love of his life).

At first I like the lighthearted tone, but then what was initially sweet started feeling cloying: intense without any heft to it, and no relief. Most moments which seemed like they should have emotional weight and importance just didn’t land for me. Scenes which could have been intense were diffused with humor or antics almost instantly. I like humorous tones sometimes, but when nothing is taken seriously the jokes stop feeling funny. I disliked every scene with the MC’s dad (the few that there were). The MC is oblivious about pretty much everything, and it made me want to yell at the book to get, just, anything about what was going on. I stopped trusting that it would handle anything well, and the way the dad controls the MC's medication didn't feel good. 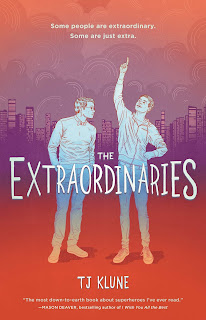