Who I Was With Her by Nita Tyndall

There are two things that Corinne Parker knows to be true: that she is in love with Maggie Bailey, the captain of the rival high school's cross-country team and her secret girlfriend of a year, and that she isn't ready for anyone to know she's bisexual.

But then Maggie dies, and Corinne quickly learns that the only thing worse than losing Maggie is being left heartbroken over a relationship no one knows existed. And to make things even more complicated, the only person she can turn to is Elissa--Maggie's ex, and the single person who understands how Corinne is feeling.

As Corinne struggles to make sense of her grief and what she truly wants out of life, she begins to have feelings for the last person she should fall for. But to move forward after losing Maggie, Corinne will have to learn to be honest with the people in her life...starting with herself.

WHO I WAS WITH HER follows a teenager who finds out her secret girlfriend has died, and doesn't know how to move on when almost no one knows they were together.

This is a story about agency, about a girl growing up and learning to make certain decisions for herself. The title is "Who I Was With Her" and I had assumed we would learn a lot more about "Her" (Maggie). Instead we have a lot more "I", following Corey's stress and fears, the way she feels like she has nothing to talk about with her friends because of this big thing she can't say... Ultimately the story is more about Corey learning to be her own person and not trying to fit what other people want, than it is about the actual girl who died. Corey's dreams were wrapped up in visions of them together in the college-bound future and now she has to figure out what she wants her life to look like when she's not running after someone else. I wish we knew more about Maggie, but ultimately the book isn't really about her, it's about who Corey was with Maggie, and who she's going to be after. 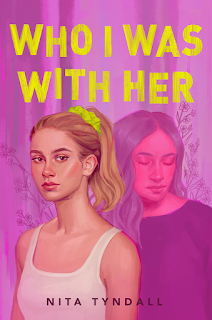