For once, it seems like the Kingdom of the Mists has reached a point of, if not perfection, at least relative peace. Queen Arden Windermere is getting settled on her family's throne; no one's going to war with anyone else; it's almost like everything is going to be okay. Even October "Toby" Daye is starting to relax her constant vigilance, allowing herself to think about the future, and what it might entail.

And then Simon Torquill comes back, and everything begins to fall apart. In Faerie, nothing stays buried forever. No matter how much you might want it to.

THE WINTER LONG is the bloody showdown we've been hurtling towards, and it does not disappoint. We finally meet the villain who transformed Toby's life, hammering home the lesson that nothing is ever simple in Faerie. Toby's relationships are changing, and some of those changes have been slowly happening for a while. I like that the characters are anything but static, even the ones who aren't personally changing are being seen by Toby in new ways and that shapes how the books treat everything they do.

This wraps up a bunch of stuff from previous books, even/especially things where it wasn’t apparent earlier that anything was still left unresolved. it puts into place all these little pieces that felt like worldbuilding but actually pointed to this. If the author’s note is to be believed, then the point of all those other books was to arrive here, rather than it being that this book is some grand wrap-up of the previous ones. Its main story starts here and was not present in the previous books. The part I’m not sure about is whether anything major was introduced and resolved in this book. So much of it was technically introduced before, I just didn’t notice because the pieces weren’t together yet. There is a fairly straight line from the inciting incident in the book to this particular volumes conclusion, but the reason it matters is so completely nested in the content and context of the series thus far. It pulls this neat trick of simultaneously being its own story in terms of the specific plot and being the emotional/informational Big Damn Reveal of the series. It leaves at least one very important thing for later books to pick up, and probably even more tiny things that I can’t quite name right now, because the series does that really well. The main character didn’t change because it’s her series and she’s probably gonna be the only narrator. I think this would make sense if you hadn’t read the rest of the series, at least in terms of the specific plot, but I don’t recommend it. If you came here because the cover looked cool and you’d like to know if you can just jump in right here, don’t, at least go two books back please. This book re-contextualizes some major things and events since the very start of the series, not in a way that breaks everything, but in a way that will make it probably a frustrating experience if you read just this book, and then try to go back to the start. However, having read the series up until this point, I am very excited for my eventual re-read in a year or two to try and catch all the things people couldn’t quite say but now I have the information to understand.

I want May to do more (and May says she wants to do more), so hopefully some book soon will given her a more active role. It feels a bit like she needed to be around for some very specific things to happen and now they're either done or haven't happened yet (depending on how far the author planned ahead). I'm excited about recent developments with Quentin, and it's nice to see how revelations from the last book but they don't make him into an entirely different character. affect the way Toby interacts with him but they don't make him into an entirely different character. One of my favorite little things in this book is the way the Luidaeg and Tybalt's relationship has altered. I started noticing the change in the last book, but it's a lot more obvious here. I love getting to finally meet a certain character, this villain who has been in the shadow of Toby's mind, affecting many things she's done since the start of the series. The reveal of the mastermind behind so much of the grief and trauma that has filled the story so far is really well handled. For me it landed right in this sweet spot between fitting the clues and being obscure. It's just obvious enough that I can think back to all these things that could have warned me something was off, but not so obvious that I feel like I should have known.

I love this one, I think it does a complicated narrative trick really well: it had to make sense on its own, with enough of a self-contained narrative that there's a start, middle, and end that all makes sense if you've never read the rest of the series or if it's been a while and you're fuzzy on the details, but also it had to tie together a bunch of things going back to the very start of the series. I'm actually a little shocked at how well it pulls it off because that's a very complicated trick to do. Because I did read the rest of the series I don't know whether or not it would reliably convey the emotional weight to a reader who picked this up at random. If it doesn't, that's literally what the previous books are for, so it's definitely not a flaw either way. I am very confident that the main storyline and the events that specifically occur here would make sense even without that backstory. Whether or not you know why the antagonists are who they are, they do more than enough here to justify their place as villains. 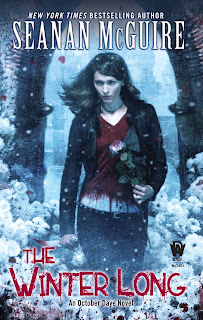