Ruthless Gods by Emily A. Duncan (Something Dark and Holy, #2)

Nadya doesn’t trust her magic anymore. Serefin is fighting off a voice in his head that doesn’t belong to him. Malachiasz is at war with who--and what--he’s become.

As their group is continually torn apart, the girl, the prince, and the monster find their fates irrevocably intertwined. They’re pieces on a board, being orchestrated by someone… or something. The voices that Serefin hears in the darkness, the ones that Nadya believes are her gods, the ones that Malachiasz is desperate to meet—those voices want a stake in the world, and they refuse to stay quiet any longer.

After attempting to read this originally I found out that the premise of the series relies on a bunch of antisemitic tropes. Due to this and the fact that this book was confusing and I did not enjoy it at all, I do not recommend this book/series. I’ve left my original review intact below.

Queer Rep Summary: N/A. The first book had Lesbian/Sapphic Secondary Character(s) but I don't know if they make an appearance here.

DNF 30% in (beginning of interlude iii).

I started reading this a week after reading the first book, WICKED SAINTS, and I don't know what's happening or why I should care. I mention the timeframe to make it clear that my confusion is not a result of waiting a long time between reading the first book and picking up the sequel. I'm perfectly fine being confused by a book, there are some I've praised for being fascinating while also spending a long time being largely incomprehensible. But I just can't get into the central motivation of "girl must save demon nightmare boy from something (???) by doing something (???)". I can handle a book being boring for a little while, and I'm fine with confusion, but this combination of unclear stakes, revelations without enough tension, general lack of context, and a plot I just can't get into means I'm going ahead and stopping now. 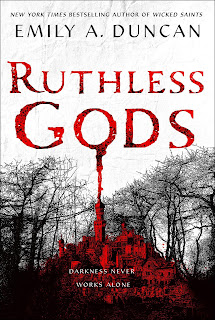