Welcome to the Books That Burn Fortnightly Roundup! Releasing every two weeks (one week early for Patrons). Remember to head to Transcripts That Burn for all available transcripts of the podcast. The newest transcript for our episode discussing THE BROKEN KINGDOMS by N.K. Jemisin is now available.

The review blog now has an "ARC" tag so you can easily find books which we reviewed after receiving a copy from the author and/or publisher. Occasionally this will also cover books which we received for review purposes from a third party, such as the Hugo-nominated works provided to Hugo voters each year.

Sometimes people ask us to boost their stuff in our stuff, here's this fortnight's mention:

Shaina Krevat, author of Tales of Mundane Magic, has recently started a YouTube channel! She’s documenting her journey as she tries to rediscover hobbies that have fallen by the wayside, including trying to read as much as she did back when she was avoiding doing homework. Check out her book reviews here! You might remember our previous interview with her, back in 2020.

Reviews forthcoming for KAIKEYI by Vaishnavi Patel, THE WICKED BARGAIN by Gabe Cole Novoa, and MOON CALLED by Patricia Briggs.

CERTAIN DARK THINGS by Silvia Moreno-Garcia is Fantasy/Horror marketed as Adult. Atl is hiding out in Mexico City after her family is murdered, but it's hard being a vampire on the run. Told in Third Person with Ensemble POVs.

VAMPIRE WEEKEND by Mike Chen is Fantasy, with queer character(s), marketed as Adult. Louise is a vampire and a musician, working nights at a hospital and trying to get a new band, when unexpected relatives appear at her door. Told in First Person with Single POV.

SASSINAK by Anne McCaffrey and Elizabeth Moon, book 1 of The Planet Pirates is Sci-Fi marketed as Adult. Sassinak was kidnapped and enslaved as a child, then starts going after planet pirates once she has command of her own vessel. Told in Third Person with Ensemble POVs.

AN EMBER IN THE ASHES by Sabaa Tahir, book 1 of An Ember in the Ashes is Fantasy marketed as Young Adult. Laia becomes a slave in order to help the rebels so they'll rescue her brother. Elias is a solder whose plan to run away is thwarted, and he redirects his efforts to just trying to stay alive in the Trials to be the next emperor. Told in First Person with Dual POVs.

THE CANDLE AND THE FLAME by Nafiza Azad is Fantasy marketed as Young Adult. Fatima is one of three survivors of a massacre, who is drawn into political intruigue after one of the Ifrit dies and she is changed. Told in Third Person with Ensemble POVs.

OCEAN'S ECHO by Everina Maxwell is Fantasy/Romance, with queer character(s), marketed as Adult. Tennal is shipped away by his aunt to be forced into a sync with Surit, a military officer who is appalled to discover that the organization he loves might do something bad. Told in Third Person with Dual POVs.

A STRANGE AND STUBBORN ENDURANCE by Foz Meadows, book 1 of The Tithenai Chronicles is Fantasy, with queer character(s), marketed as Adult. Velasin is in a state of despair after an assault, then is almost immediately sent away in an arranged diplomatic marriage. Someone doesn't want this alliance to happen, and a series of violent occurrences ensue as he and his new husband try to find out who is determined for their relationship to fail. Told in First/Third Person with Dual POVs.

A TORCH AGAINST THE NIGHT by Sabaa Tahir, book 1 of An Ember in the Ashes is Fantasy/Romance marketed as Young Adult. Laia and Elias are on the run, but Elias has been poisoned. Helene doesn't know if she'll survive her new role as Blood Shrike. Told in Third Person with Ensemble POVs.

After trying for a month, I didn't finish THE CITY OF DUSK by Tara Sim. That will get a formal DNF review soon.

I attempted and didn't finish THE MASK OF MIRRORS by M.A. Carrick. It had too much of a focus on visual details like the color of everyone's clothing, and I can't picture any of that so it bogged down the story for me. I also didn't like the abrupt tone shift between the epilogue and the first chapter.

I wrote formal DNF reviews for THE FINAL SIX by Alexandra Monir and FOREST OF A THOUSAND LANTERNS by Julie C. Dao.

Nothing of note here, for that turn to the re-reads section.

I'm working my way through the October Daye series by Seanan McGuire. It's going very well, and I'm excited for when I get to the newest book which came out this summer. I also read volume three of Lore Olympus, now available in book form rather than just on Webtoons.

For 2022 I'm hosting a reading challenge that lasts the whole year. November's prompt is to read something by a gay or lesbian author. Our patrons voted for THE OLEANDER SWORD by Tasha Suri. I tried this book and ultimately ended up not finishing it, you can find that review here.

I'm in the middle of re-reading ONCE BROKEN FAITH by Seanan McGuire, part of the October Daye series. I'm also trying to decide whether to finish reading TRAITOR'S MOON by Lynn Flewelling. I loved the first two books in the series, but the third one isn't working as well for me and I'm not sure yet why.

This time last year I read HENCH by Natalie Zina Walschots, the story of a Hench who uses spreadsheet to prove that the heroes are the bad guys after all.

As for the podcast, hopefully you're enjoying our most recent episode, RADIANCE by Catherynne M. Valente, as well as the first half of our interview with author Seanan McGuire (AKA Mira Grant, A. Deborah Baker), released in January. If you'd like to receive the second (spoiler-filled) half of the interview, please consider supporting us on Patreon. Patrons receive this newsletter one week early, as well as a list of upcoming podcast episodes for the next three months. 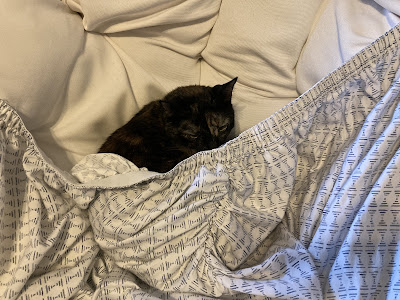