Being a vampire is far from glamorous...but it can be pretty punk rock.

Everything you've heard about vampires is a lie. They can't fly. No murders allowed (the community hates that). And turning into a bat? Completely ridiculous. In fact, vampire life is really just a lot of blood bags and night jobs. For Louise Chao, it's also lonely, since she swore off family ages ago.

At least she's gone to decades of punk rock shows. And if she can join a band of her own (while keeping her...situation under wraps), maybe she'll finally feel like she belongs, too.

Then a long-lost teenage relative shows up at her door. Whether it's Ian's love of music or his bad attitude, for the first time in ages, Louise feels a connection.

But as Ian uncovers Louise's true identity, things get dangerous--especially when he asks her for the ultimate favor. One that goes beyond just family...one that might just change everything vampires know about life and death forever.

Louise has structured her life around access to blood, a necessity for a vampire. But this cycle of subsistence living keeps her from being able to make a go of other opportunities when they come along. Her few close connections (her aunt and her friend Marshall) have both died, and she hasn't really tried to make any new ones in the years since. She has an adorable dog, and the pattern of her nights is shaped by working at the hospital, getting blood, occasionally trying out for music gigs, and taking care of her corgi. There's a vampire trying to organize the community, but Louise mistrusts his sunny personality and his technologically invasive methods, mostly trying to avoid him as much as possible. When a local blood shortage threatens her and many other vampires' continued existence, this becomes much more difficult to manage.

The worldbuilding is a mix of musical ideas and music references, facts about being a vampire, and the slowly unfurling tale of how Louise ran away from home and become a vampire in her early twenties. I'm not musically inclined and didn't know most of the songs and musicians being referenced, but each time they were discussed in context with what they invoke and their place in the history of music in a way that was interesting and informative without feeling like a lecture.

The plot revolves around Louise receiving an unexpected visit by a grandfather and grandson as the boy's mother is in the hospital dying of cancer. The pair are somehow related to Louise but it takes a while before she figures out exactly how (plus her vampirism means she looks only a decade older than the kid). The main story proceeds pretty linearly, punctuated by flashbacks as Louise is processing previous events with new understanding of herself. Interacting with these new people shakes her out of her normal patterns and it takes a bit to adjust.

The ending feels a bit neat, like too huge of a thing manages to be sorted out in a way that supposedly fixes things as much as possible. I think the bit that's bugging me is it feels like Louise is the supporting character for both of the main storylines (Ian dealing with his mother's impending death, and Eric trying to make things better for vampires), but by being present exactly where she is she ends up helping with both things. She actually feels like if a regular person who happened to be a vampire had to deal with this stuff but didn't budge an inch on taking care of her dog and talking about music.

This was great and I highly recommend it for anyone who wishes music, vampires, and family trauma overlapped more often. 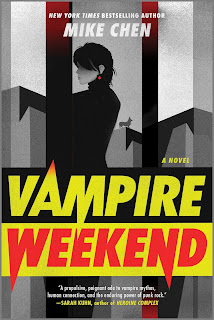