In the vein of Madeline Miller’s Circe comes a bold and sweeping debut that reimagines the life of Kaikeyi, the vilified queen of the Indian epic the Ramayana.

“I was born on the full moon under an auspicious constellation, the holiest of positions—much good it did me.”

So begins Kaikeyi’s story, that of a young woman determined to create her own destiny in a world where gods and men dictate the shape of things to come. But as she transforms herself from an overlooked princess into a warrior, diplomat, and most-favored queen, Kaikeyi’s will clashes with the path that has been chosen for her family. And she must decide if her resistance is worth the destruction it will wreak.

Kaikeyi is a strong-willed protagonist, pushing the boundaries of her life to ease the way for women around her and those she'll never know. In the process of trying to eke out a place for herself as the youngest of three wives to her husband, she changes the way women are seen in her new home. She has access to the binding plane, where she can see and often influence the bonds between people. Through a mix of mundane influence, occasional manipulation, and courage in an early battle, she becomes one of her husband's most trusted advisers. At every turn she's driven to make things better for women, aware of how much their fates depend on the whims of the men in their lives.

She was concerned about getting married and it takes someone pointing out how she's isolated herself before she begins trying to build a life and connections in her new home rather than just mourning the unsupervised freedom she had as a child. Once she gets to know them, Kaikeyi loves her husband and his other two wives. Her identity as a mother is central to the second half of her story, and she loves all her sons (though she only bore one of them). The worldbuilding includes detail about Kaikeyi's clothes and surroundings every so often, such as when she chooses a particular sari for significant moments. I prefer stories which don't rely heavily on detailed descriptions of the characters' surroundings, and this was a good level for me.

Kaikeyi's narration includes periodic comments about how she didn't know certain things would make everything turn out so badly. The turn, when it happens, is so close to the end that I was starting to think her warnings would be for nothing. Most of the story is spent showing how she conducted her life and gained influence with the help of the binding plane, and the way she did her best to recover from some early mistakes when she was first learning how this power worked.

I'm not already familiar with the Indian epic this is reimagining, and I didn't need any familiarity in order for this to be a moving story with memorable characters. I enjoyed reading it, and will probably try to read the Ramayana if I can, since it's piqued my interest. 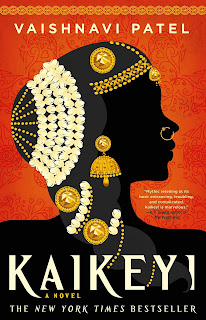