After the events of the Fourth Trial, Martial soldiers hunt the two fugitives as they flee the city of Serra and undertake a perilous journey through the heart of the Empire.

Laia is determined to break into Kauf--the Empire's most secure and dangerous prison--to save her brother, who is the key to the Scholars' survival. And Elias is determined to help Laia succeed, even if it means giving up his last chance at freedom.

But dark forces, human and otherworldly, work against Laia and Elias. The pair must fight every step of the way to outsmart their enemies: the bloodthirsty Emperor Marcus, the merciless Commandant, the sadistic Warden of Kauf, and, most heartbreaking of all, Helene--Elias's former friend and the Empire's newest Blood Shrike.

Bound to Marcus's will, Helene faces a torturous mission of her own--one that might destroy her: find the traitor Elias Veturius and the Scholar slave who helped him escape...and kill them both.

A TORCH AGAINST THE NIGHT begins where AN EMBER IN THE ASHES left off, with Elias and Laia having just escaped so that Laia can attempt a rescue of her brother from the prison, Kauf.

The worldbuilding focuses on the Tribes more this time around, maintaining things established in the first book but not doing as much worldbuilding for the other groups and locations. One thing that's new is the Waiting Place where Shaeva helps the dead pass on. A lot of new backstory and worldbuilding is conveyed to Elias there, gradually through a series of conversations.

One of my favorite things about the structure of this series is that Laia and Elias each have another person they're interested in. Rather than a standard love triangle, this creates something more tangled where it's uncertain whether they're both interested in a relationship with each other. Any potential romance takes a backseat for much of the book because of the circumstances of their journey, but there's just enough there to keep things interesting. I like how Keenan's storyline plays out, I genuinely didn't guess what was going on with him and I'm pretty pleased with the reveal. Helene isn't around the others as much, but I like that because her chapters get a chance to be on their own rather than echoing Elias's, since in the first book we only saw Helene through Elias (and very occasionally Laia).

Each of the characters have specific and very understandable reasons for acting at cross-purposes. Some of those justifications are definitely on the evil side, but so far none of the characters are evil for the sake of it. Their justifications may be power, security, making sure no one can do to them what they're doing to everyone else, but there's always a reason. In a series that seems determined to add perspectives with each sequel, that's not an easy feat. I don't have to like all of the point-of-view characters in order to enjoy the book. Even when I vehemently disagree with them it's not a frustrating reading experience, instead it's highly engaging.

This is the second book in a quartet, and it wraps up a pretty important thing left hanging from the first book, since this is where the planned attempt to rescue Laia's brother is made. The journey itself functions mostly as a new storyline, though technically it began at the very end of the first book. Several smaller things are resolved, but the first book ends on a cliffhanger and then this one picks up immediately where it left off, which makes it harder for me to remember which things where mentioned at the end of the first vs the beginning of the second. Some things related to Helene are specifically left for later in a way that makes me think they may drive the third book. Helene is a new narrator, her perspectives joining the rotation with Laia and Elias. Laia and Elias are consistent with themselves in the first book, though they do change gradually in this one (especially Elias). There's an audiobook narrator for each perspective, Laia, Elias, and Helene. I like the performances, they did a good job.

This begins exactly where the first book left off, with Laia and Elias running through the tunnels. Reminders of what happened in the first book are doled out slowly, when the characters have a moment to think while running for their lives. It wouldn't make sense to start here, since the main plot is the second half of the story begun in the first book. Since it's a quartet it does set up plenty to keep the story going, but Laia became a slave in the first book in hopes of getting her brother rescued and this book is about the journey for that rescue attempt. Beginning here without having that setup would make a lot of the story less satisfying.

Laia and Elias are traveling to Kauf to rescue Laia's brother. They're joined by some characters from the first book, and the party splits and reconfigures several times as they get help along the way. Helene is the Blood Shrike, trying to deal with the hateful Commandant's machinations from the inside, all while under the thumb of the new emperor. In an attempt to get back at Laia and the resistance, the Commandant is using her influence to try and wipe out the Scholars and anyone she thinks of as helping them. These plot threads intersect more towards the end, establishing a new status quo going into the third book.

I enjoyed this and will keep reading the series! 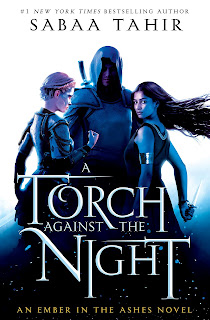