Welcome to Mexico City, an oasis in a sea of vampires. Domingo, a lonely garbage-collecting street kid, is just trying to survive its heavily policed streets when a jaded vampire on the run swoops into his life. Atl, the descendant of Aztec blood drinkers, is smart, beautiful, and dangerous. Domingo is mesmerized.

Atl needs to quickly escape the city, far from the rival narco-vampire clan relentlessly pursuing her. Her plan doesn’t include Domingo, but little by little, Atl finds herself warming up to the scrappy young man and his undeniable charm. As the trail of corpses stretches behind her, local cops and crime bosses both start closing in.

Vampires, humans, cops, and criminals collide in the dark streets of Mexico City. Do Atl and Domingo even stand a chance of making it out alive? Or will the city devour them all?

"...life is no adventure. And there are no heroes, only survivors."

Atl is a vampire hiding out in Mexico City after her family was murdered. Domingo is a former street kid, now working as a scrap picker for a rag and bone man. When he has a chance encounter with Atl on the subway, she invites him to her home to drink from him. What Atl intended as a single meal turns out to be the beginning of a partnership as they work on fleeing Mexico City together. They're pursued by Nick, a Necros who is obsessed with Atl, and Ana Aguirre, a detective who thought her transfer to Mexico City would mean dealing with fewer vampires than she used to.

The rapport between Domingo and Atl is excellently-written, driven by Domingo's adoration of Atl, and Atl's need for Domingo's help but distaste for feeling weak. Atl is using up every one of her mother's contacts along the way, relying on wisps of goodwill and loyalty from humans and vampires who assumed their obligations died long before Atl's mother did. This results in a tangle of one-off and repeating characters as Atl and Domingo navigate this loose network of contacts, just trying to get out of the city alive.

The worldbuilding is immersive, built through stories, buildings, and how the characters move through this alternate version of Mexico City where not only are vampires real but there are several kinds of them. Some (like Atl) are Tlahuihpochtli descended from Aztec blood drinker temple priestesses, but human colonization and the encroachment of other vampires, like Necros and Revenants, have made things more complicated for recent generations. Several decades ago humans found out vampires are real, and many places promptly tried to legislate them out of existence. Mexico City is one such "vampire free" zone, a situation which causes problems for Atl.

The plot is a web of pursuers and pursued, beginning in earnest when one of Atl's pursuers gets sloppy and the police find a dead human. It's a dance of obsession, violence, and death, as Atl tries to use Domingo without him spooking, while Domingo finds himself falling in love with her and not minding being used.

I loved every minute, and am extremely happy with the ending. Don't miss this one. 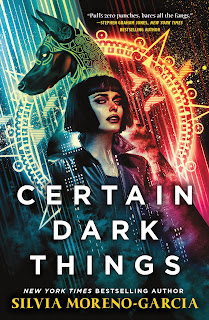