The Whispering Dark by Kelly Andrew

Delaney Meyers-Petrov is tired of being seen as fragile just because she's Deaf. So when she's accepted into a prestigious program at Godbole University that trains students to slip between parallel worlds, she's excited for the chance to prove herself. But her semester gets off to a rocky start as she faces professors who won't accommodate her disability, and a pretentious upperclassman fascinated by Delaney's unusual talents.

Colton Price died when he was nine years old. Quite impossibly, he woke several weeks later at the feet of a green-eyed little girl. Now, twelve years later, Delaney Meyers-Petrov has stumbled back into his orbit, but Colton's been ordered to keep far away from the new girl... and the voices she hears calling to her from the shadows.

Delaney wants to keep her distance from Colton -- she seems to be the only person on campus who finds him more arrogant than charming -- yet after a Godbole student turns up dead, she and Colton are forced to form a tenuous alliance, plummeting down a rabbit-hole of deeply buried university secrets. But Delaney and Colton discover the cost of opening the doors between worlds when they find themselves up against something old and nameless, an enemy they need to destroy before it tears them -- and their forbidden partnership -- apart.

Delaney is a post-lingual Deaf girl who sometimes hears the shadows whispering. She gets into a university whose stated purpose is to teach its students to traverse between realities. Colton is a student who briefly died when he was a child, meeting Delaney briefly at the time. When they meet again on campus, she doesn’t recognize him but is drawn to him anyway, while he instantly knows her and can’t keep his distance. They begin spending time together, then the lines are blurred further when another student dies.

There’s a consistent theme of ableism, mainly but not only from professors who don’t know Delaney is deaf (because they didn’t read the emails alerting them). She’s navigating this new space and deciding how much she’d rather deal with not being able to usefully hear in the moment or with overt ableism once people know she’s deaf. Whether she’s using her implant and what she does or does not hear is important throughout, and is used to great effect once things start getting spooky.

The worldbuilding is sparse, most of the details are atmospheric and unexplained until late in the book. The specific answers and explanations (when they finally arrived) wrapped up pretty much everything I wanted to know. I enjoy vibe-heavy books that leave me interested but confused for long stretches, so this was a deeply satisfying read for me. Colton’s secrets (and those he keeps for others) are hinted at but not revealed early, keeping the reader and Delaney equally in the dark for much of the story.

For a book with parallel worlds there aren’t many descriptions of traversals, though there are more towards the end. I like how much the focus is on Delaney piecing things together and trying to make it through her classes, and on her dynamic with Colton. I often enjoy books with mysterious and brooding guys, and this delivered.

Heavy on vibes, supported by a delicate but satisfying plot, don’t miss THE WHISPERING DARK. 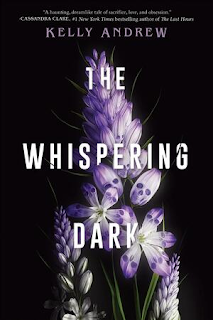