A Marvellous Light by Freya Marske (The Last Binding #1)

Robin Blyth has more than enough bother in his life. He’s struggling to be a good older brother, a responsible employer, and the harried baronet of a seat gutted by his late parents’ excesses. When an administrative mistake sees him named the civil service liaison to a hidden magical society, he discovers what’s been operating beneath the unextraordinary reality he’s always known.

Now Robin must contend with the beauty and danger of magic, an excruciating deadly curse, and the alarming visions of the future that come with it—not to mention Edwin Courcey, his cold and prickly counterpart in the magical bureaucracy, who clearly wishes Robin were anyone and anywhere else.

Robin’s predecessor has disappeared, and the mystery of what happened to him reveals unsettling truths about the very oldest stories they’ve been told about the land they live on and what binds it. Thrown together and facing unexpected dangers, Robin and Edwin discover a plot that threatens every magician in the British Isles—and a secret that more than one person has already died to keep.

A MARVELLOUS LIGHT is about Edwin and Robin, initially in each other’s company through a bureaucratic mistake. Robin had been cursed when he was unable to provide unknown assailants with information his (missing) predecessor had also denied them. Edwin was supposed to be liaising with whomever held that office, and instead proceeded to try and remove the curse. The actual plot is pretty straightforward, with only a few more twists after that. The action is solid (especially the bit in the maze) and I like several of the secondary characters, but the heart of this is absolutely Edwin and Robin’s relationship as they’re continually in each other’s company.

The rapport between Edwin and Robin slowly builds, lagging behind the intensity of each man’s buried attraction to the other. Robin adjusts pretty quickly to the existence of magic (a situation made much harder to ignore by the harsh nature of his introduction). Edwin’s focus is on trying to remove Robin’s curse, initially thinking of their acquaintance as very temporary and somewhat reversible. Much of the book is spent on Edwin’s family’s estate, with his siblings whose pranks range from frustrating to cruel.

The worldbuilding is pretty subtle about placing the era, the setting is one where magic exists within the otherwise real history of the British Isles. Since I wasn't trying very hard to place it I was content to know it's a while ago, but after the invention of cars. I'm sure there are clues to place it more precisely if I looked hard, but the story wasn't trying to trouble me with those. It did more with the ways that magic could be secret, and the key seems to be that (in England, specifically), it's tied up in old money and old families since magic is passed through bloodlines.

I enjoyed this immensely and will definitely read the rest of the series. The ending sets up a clear idea for the arc of the series, and I'll happily read more in this setting even if Edwin and Robin don't stay as the protagonists. 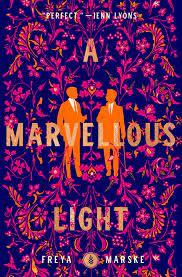