A Unkindness of Ghosts by Rivers Solomon

Aster has little to offer folks in the way of rebuttal when they call her ogre and freak. She's used to the names; she only wishes there was more truth to them. If she were truly a monster, she'd be powerful enough to tear down the walls around her until nothing remains of her world. Aster lives in the lowdeck slums of the HSS Matilda, a space vessel organized much like the antebellum South. For generations, Matilda has ferried the last of humanity to a mythical Promised Land. On its way, the ship's leaders have imposed harsh moral restrictions and deep indignities on dark-skinned sharecroppers like Aster. Embroiled in a grudge with a brutal overseer, Aster learns there may be a way to improve her lot-if she's willing to sow the seeds of civil war.

I love so much about this book, I just couldn't handle a particular topic that's triggering for me when I was already stressed (mostly in good ways) by the story so far. The worldbuilding is very cool, paying attention to language and tiny cultural differences existing between the decks. The audiobook performance is good. I like Aster as a main character.

I really wish I could handle finishing this, but I just can't. 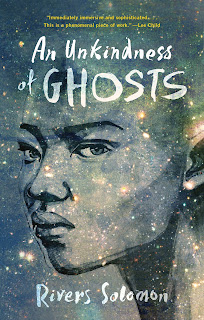