The Shadow Hour by Melissa Grey (The Girl at Midnight #2)

A battle has been won. But the war has only just begun.

Everything in Echo’s life changed in a blinding flash when she learned the startling truth: she is the firebird, the creature of light that is said to bring peace.

The firebird has come into the world, but it has not come alone. Every action has an equal and opposite reaction, and Echo can feel a great and terrible darkness rising in the distance. Cosmic forces threaten to tear the world apart.

Echo has already lost her home, her family, and her boyfriend. Now, as the firebird, her path is filled with even greater dangers than the ones she’s already overcome.

She knows the Dragon Prince will not fall without a fight.

Echo must decide: can she wield the power of her true nature—or will it prove too strong for her, and burn what’s left of her world to the ground?

Welcome to the shadow hour.

There are two active love triangles for most of the book. They're handled differently but have some overlap in terms of their setup. Caius, Echo (with Rose in her head), and Rowan comprise the first, and the second is composed of Dorian, Jasper, and Quinn. Echo and Rowan were kind of dating when the first book began, but Echo thought that killing Rowan's comrade de facto broke them up. Now, we find out Rowan didn't necessarily take it that way. Caius loves Echo in a way that's probably separate from how she contains his previous love, Rose, but it gets tricky to untangle. Echo is seventeen and Caius is around two hundred years old. Jasper and Quinn were previously in a relationship that's implied to have been abusive, with Quinn being such an all-consuming presence that Jasper ended up feeling stifled and used. Dorian likes Jasper, but isn't ready to try a relationship since he's barely given up on his long-unrequited crush on Caius. Because of how thin the plot is in terms of things happening, the love triangles shape a lot of the emotional beats of the narrative. While Dorian/Jasper/Quinn is technically a love triangle, Jasper is clearly still traumatized by his previous time with Quinn, and has zero interest in resuming any intimacy with him. If you don't like the relationship tangles you probably won't like the story, but there are other things to enjoy once you're in it. I'm not sure what the age gap is between Jasper and Dorian, precisely, but Dorian is older than him by at least a century. Jasper's previous toxic relationship was a while ago as a sixteen-year-old with Quinn, so while I don't know how old he is here he's at least implied to be an adult.

The worldbuilding remains very character-driven, with very sparse details about any of either side's social structure. Even the history of the firebird is conveyed through impressions and flashbacks conveyed to Echo as its vessel. The main quest of the book is to get more information (since so little has been forthcoming), with separate threads following Ivy and Echo as Ivy tries to figure out the Dragon Prince's plans, and Echo sneaks off to find out more about the firebird and its destructive opposite. They travel to a smattering of Earth cities, either to get supplies or as part of the various quests. There's a fair number of references to human things, but since they're often in the form of a subtle joke about one of the non-human characters being unfamiliar with something, they aren't very explanatory. That makes them feel more like character development than worldbuilding.

I started noticing that whenever the plot needed them to figure something out, someone (usually Caius or Echo) would just... have studied that randomly earlier and just know it. Out of nowhere, and not aligning with their known interests. People really do that sometimes, but it's kind of happening a lot.

The audiobook narrator did a decent job with the voices, but towards the end the male characters started to blend together as their voices were performed similarly. This was especially true for minor characters who only have brief appearances.

As the second book in a trilogy, this continues several things left hanging from the first book but doesn't really wrap any of them up. It shows Echo adjusting to being the firebird, the continued development of the main love triangle, and Ivy's ongoing recovery from having been tortured by Dorian in the first book. There's a new storyline related to stopping the shadow thing which was released when the firebird manifested, and that is partly left hanging for the third book to wrap up. It introduces and resolves something related to a new love triangle, and it leaves for later the start of something for Ivy that I hope develops further in the finale. Because it's such a character-focused story, a lot of the resolutions involve characters dying or grief over a character who has died, while ongoing issues tend to be either physical peril or injuries. Even an early battle lingers in the form of shadows making people sick, with the strange illness having more of an impact than the conflict itself.

Echo is still the main character and her voice is consistent with the first book. I'm still enjoying the multilingual vocabulary tidbits. It might make sense to start here if someone didn't read the first book but went straight to this one. Even though it's character-focused, the relationship tangles are established early in terms of their current position, then develop throughout once recapped from the first book. That makes it easy to jump in. The other thing that makes it easy to start here is that only a couple of important things actually happened in the first book, with about as many happening here. That makes the plot easy to recap, and the characters are shown in such an immersive manner that they make sense almost immediately. 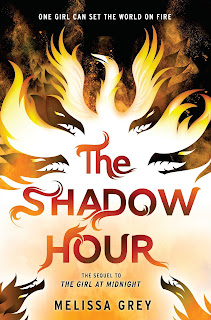