On the Prowl - Anthology

Four stories of inhuman passions from four of the hottest authors in paranormal romance...

"Alpha and Omega" by Patricia Briggs

The werewolf Anna finds a new sense of self when the son of the werewolf king comes to town to quell unrest in the Chicago pack--and inspires a power in Anna she's never felt before.

A Lord of the Fey crosses paths with a fiery red-headed mage named Claire in a New York auction house. But in this strange underground society, the rarity up for sale is Claire herself.

Among the children of the moon, Milady is of mixed blood--part Mon re, part human, and destined to be alone. Until she meets a man who could be her salvation--or her downfall.

ON THE PROWL brings together four stories from four paranormal romance authors.

“Alpha and Omega” by Patricia Briggs takes place during the events of MOON CALLED, and answers what Charles was doing after Mercy alerted Bran about problems in one of the Chicago packs. It stars Anna and Charles, and is the prequel to a full novel, CRY WOLF, which is the first in the Alpha and Omega companion series in the same world as the Mercedes Thompson books. It’s my favorite one in the collection, and the story which draws me to re-reading this book. Highly Recommend.

I don’t like “Inhuman”, it feels unfriendly to casual readers. Last time I read it I was reading a lot of Eileen Wilks’s work alongside it and I found it just as confusing and impenetrable then. It’s set in the World of the Lupi series (of which I’ve read at least five books), but fails to sufficiently explain whatever is happening. It seems to assume I already know these characters. At this point I don’t know if something is just not connecting for me or if it’s the story itself, but I’ve never liked this one. If you’re reading the World of the Lupi books, this goes right before NIGHT SEASON. Not Recommended.

“Buying Trouble” starts out well and the middle is good, but the ending was weird and included the main character having a body-shaming relationship with her own second form which newly manifested. That soured how much I had been enjoying the story. I do like it overall, but that one issue was frustrating, however brief, and served to highlight a bunch of very troubling implications of the worldbuilding. Not Recommended.

“Mona Lisa Betwining” is part of the Monère series, but I have not yet read any of those books. It immediately refers to a character having died who seems like they were probably important in one of the full novels, so this might spoil some plot points. It mostly makes sense on its own without having read the other books, but that’s because it’s one-third conversation, one-third backstory, and one-third explicit sex scenes (split between two of them), so there isn’t a whole lot of plot to worry about. Recommend. 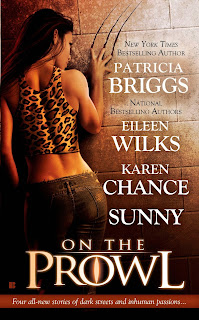