The Candle and the Flame by Nafiza Azad

Fatima lives in the city of Noor, a thriving stop along the Silk Road. There the music of myriad languages fills the air, and people of all faiths weave their lives together. However, the city bears scars of its recent past, when the chaotic tribe of Shayateen djinn slaughtered its entire population -- except for Fatima and two other humans. Now ruled by a new maharajah, Noor is protected from the Shayateen by the Ifrit, djinn of order and reason, and by their commander, Zulfikar.

But when one of the most potent of the Ifrit dies, Fatima is changed in ways she cannot fathom, ways that scare even those who love her. Oud in hand, Fatima is drawn into the intrigues of the maharajah and his sister, the affairs of Zulfikar and the djinn, and the dangers of a magical battlefield.

Nafiza Azad weaves an immersive tale of magic and the importance of names; fiercely independent women; and, perhaps most importantly, the work for harmony within a city of a thousand cultures and cadences.

Zulfakir bonds with Fatima's fire to save her life before they know each other at all. This means Fatima's attraction, while eventually genuine, lags behind Zulfikar's bond to her, and the trajectory of their relationship resembles a political or otherwise arranged marriage where the couple become close after they're already linked. I like this and adjacent tropes, so I enjoyed their romance immensely. Because it's not actually an arranged marriage, there are some associated secondary tropes that play out less predictably in enjoyable ways.

The female characters are complex and vibrant, even (or perhaps especially) when at pursuing contradictory aims. The Alif sisters appear often as a unit, but each of them get brief moments as distinct people outside of their connection. I was treated as a part of a similar unit as a child, and so I'm grateful that the narrative clearly does not think of them as interchangeable. There's a strong emphasis on women's rights and female empowerment, with women claiming control of their own bodies and asserting their right to take up space. These themes take into account misogynist efforts to stop them, but they are independent of what the male characters think about it. It's handled as a theme throughout with a few pointed scenes, making it obvious as a societal value with specific impacts, even if some misogynist characters think their repulsive actions will win out instead.

Most of the male characters are less distinct, having far less space in the narrative. By the end, I got a sense of who Zulfakir and Anwar are as people, but no real sense of the rest of the men. To me, this feels like the right emphasis for this story and I'm not bothered by it, but I did want to note it (especially in contrast to how well we get to know most of the women).

The worldbuilding is detailed, taking seriously that the various characters are part of that world. There are at least two scenes where characters who spent time living on the street give a walking tour to one of the nobility. These moments double as opportunities to show the reader even more of the city, and from a more intimate perspective. There are descriptions of clothes and food from a variety of religions and cultures, humans and djinn, making the city feel alive and vibrant. The audiobook narrator did a wonderful job, the audiobook is excellent.

The plot builds slowly, focusing on conversations between people as they go about their lives. It means that long stretches feel almost like a slice-of-life story, leaving me with no idea what the overall direction was, nor which scenes were important to the main plot. Much of the tension in the middle of the story is between Fatima and her adoptive sister, Sunaina, as Fatima has been suddenly and irrevocably changed but is unable to fully explain to her sister what happened. Even when the political intrigue plotline begins to surface, it's important but doesn't take over the narrative because no one thing is given primacy.

I'll definitely be checking out more by this author, this is an excellent story. 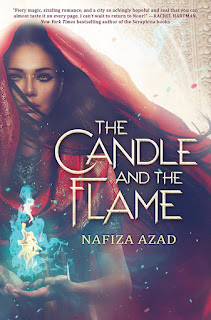