Sassinak was twelve when the raiders came. That made her just the right age: old enough to be used, young enough to be broken. Or so the slavers thought. But Sassy turned out to be a little different from your typical slave girl. Maybe it was her unusual physical strength. Maybe it was her friendship with the captured Fleet crewman. Maybe it was her spirit. Whatever it was, it wouldn't let her resign herself to the life of a slave. She bided her time and watched for her moment. When it finally came, she escaped.

But that was only the beginning for Sassinak. Now she's a fleet captain with a pirate-chasing ship of her own, and only one regret in her life: not enough pirates.

Sassinak is captured by planet pirates as a child, losing her whole family. She joins the Fleet once she gets free, and begins to direct her later career towards stopping slavery and piracy altogether.

The worldbuilding is immersive in several different settings throughout different stages of Sassinak’s life, from her capture and enslavement in childhood, to her Fleet training, to various shipboard positions throughout her early adulthood and middle age. Technically this is the first book, but it can also be read after its prequel/sequel THE DEATH OF SLEEP.

The narrative skips over years at a time, filling in bits of backstory as necessary rather than trying to tell all the twists and turns of Sassinak’s career in the Fleet. This keeps the pacing tight, as each section forms a discreet narrative. The later ones benefit from Sass’s increased knowledge and expertise, but most of the secondary characters are swapped out for new ones since first they’re her fellow slaves, then Fleet students, then crew-mates on successive vessels. That military structure means she has different people in similar official roles around her, forming closer friendships with a few of them.

Most of the difficulties revolve around saboteurs trying to use existing prejudices against heavyworlders to deflect suspicions from whomever the actual malicious agents may be. There’s at least one firefight with pirates, which is pretty exciting. The political tensions writ large exacerbate petty tensions between individuals in a way that feels realistic.

The ending is specifically a “to-be-continued” situation, where the sequel is a kind of prequel which explains how Lunzie and some others ended up in cold sleep for decades, and then the third book is about Lunzie and Sass going after planet pirates as an institution. That’s what seems to be promised based on SASSINAK’s cliffhanger ending and the other books’ blurbs, but I’ll find out for certain when I get to them. I enjoyed this and plan to read the rest of the trilogy. 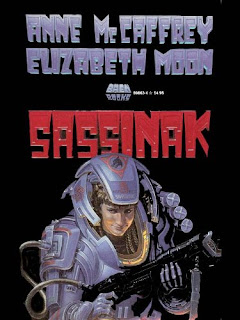