Anna does boring things for terrible people because even criminals need office help and she needs a job. Working for a monster lurking beneath the surface of the world isn’t glamorous. But is it really worse than working for an oil conglomerate or an insurance company? In this economy?

As a temp, she’s just a cog in the machine. But when she finally gets a promising assignment, everything goes very wrong, and an encounter with the so-called “hero” leaves her badly injured. And, to her horror, compared to the other bodies strewn about, she’s the lucky one.

So, of course, then she gets laid off.

With no money and no mobility, with only her anger and internet research acumen, she discovers her suffering at the hands of a hero is far from unique. When people start listening to the story that her data tells, she realizes she might not be as powerless as she thinks.

Because the key to everything is data: knowing how to collate it, how to manipulate it, and how to weaponize it. By tallying up the human cost these caped forces of nature wreak upon the world, she discovers that the line between good and evil is mostly marketing. And with social media and viral videos, she can control that appearance.

It’s not too long before she’s employed once more, this time by one of the worst villains on earth. As she becomes an increasingly valuable lieutenant, she might just save the world.

HENCH is a heady mix of spreadsheets and schadenfreude, with cruel beauty in its precision.

Because of the focus on the human cost of “heroes” there are long sections threaded through with the slow process of healing, of Anna coming to terms with how her body has been broken and reforged, accepting new limitations and finding joy and freedom in novel tools. Her cane is a great example, she uses it as an extension of herself, to support her, protect her, and to make grand her expressions since every gesture is fancier when punctuated by a cane.

Anna is very observant of people, both in ways that matter to what becomes the bulk of her work as a hench, and in ways that make the book better to read. Her turns of phrase, particularly when describing someone’s voice or laugh, are perfectly suited to the moment and bring new detail to each scene. The prose in general, told through Anna, uses what she observes to simultaneously give the reader more about her and to make every interaction feel fuller. The action scenes are poetic, beautifully described and full of the human cost of each moment of violence.

I love Anna’s rapport with Leviathan. Their purely platonic relationship has loyalty and respect without treading on each other's boundaries, built on whatever they're both willing to share. This handles several other strong platonic relationships very well. It hints at a sexual past for Anna, and features a bad date early on, but her strongest relationships are with her friends and co-workers, people she relies on and trusts quite literally with her life.

The ending is perfect, stopping right where it needs to. I’m sad that this is (as far as I know) stand-alone, since I don’t often run into many books with this perfect mix of fierce loyalty, revenge, and data manipulation, and I want more. 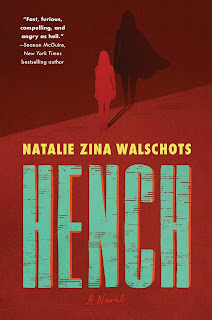