Mercy Thompson is a shapeshifter, and while she was raised by werewolves, she can never be one of them, especially after the pack ran her off for having a forbidden love affair. So she's turned her talent for fixing cars into a business and now runs a one-woman mechanic shop in the Tri-Cities area of Washington State.

But Mercy's two worlds are colliding. A half-starved teenage boy arrives at her shop looking for work, only to reveal that he's a newly changed werewolf--on the run and desperately trying to control his animal instincts. Mercy asks her neighbor Adam Hauptman, the Alpha of the local werewolf pack, for assistance.

But Mercy's act of kindness has unexpected consequences that leave her no choice but to seek help from those she once considered family--the werewolves who abandoned her...

Mercy is half Native American, and a walker, she transforms into a coyote and was partly raised by a werewolf pack. This puts her in an odd position relative to the werewolves, as she’s somewhat entangled in their hierarchy but isn’t trying to be part of it.

As the first book in the series, MOON CALLED establishes the presence of various supernatural factions such as werewolves, vampires, witches, fey, and Native American people like Mercy. It focuses on the current precarious position in which the werewolves find themselves; many of the lesser fae came out in a controlled manner several years ago, but the werewolves are an open secret in military circles. This sets up those groups and some of the relationships between them, including between Adam’s pack and the Marrok’s pack in the mountains. It also establishes Mercy’s history with Sam and her current position relative to Adam (living nearby and taking joy in simple pleasures, like annoying him with the car in her yard).

The plot revolves around a strange werewolf who shows up in town and then is attacked in Mercy’s presence, setting off a string of conflicts which involve kidnappings and an elaborate plan. It has some twists and turns but is pretty easy to follow. The meeting with the vampires has always felt a bit out of place in this story, but it’s serving to set up some things that’ll come into play later on. It’s a solid story with a lot of ground to cover, and it does it well. MOON CALLED is a great start to the series. 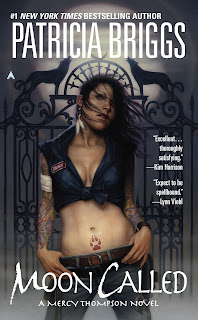